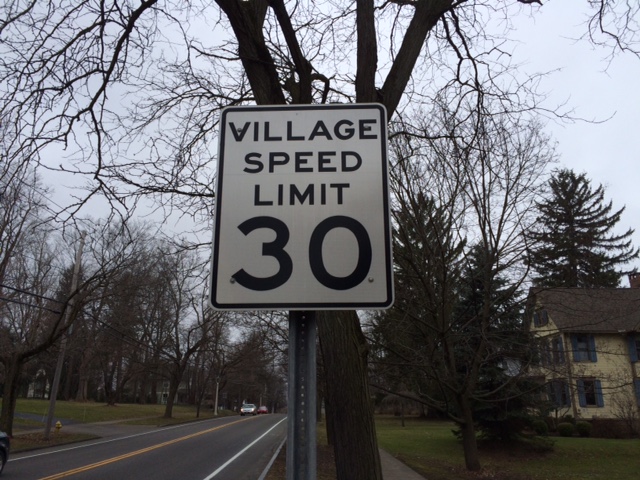 Over the past few weeks there has been a string of car crashes involving pedestrians and cyclists which resulted in injuries and deaths—most notably in the City along Lake Avenue. City Councilwoman Molly Clifford and County Legislator Cynthia Kaleh are urging local leaders to improve safety along the road. “Cars tend to travel at a high rate of speed, many pedestrians choose to walk in the street, and there is a high volume of traffic much of the day. Unfortunately, we are seeing the tragic impact of all of these factors coming together.” 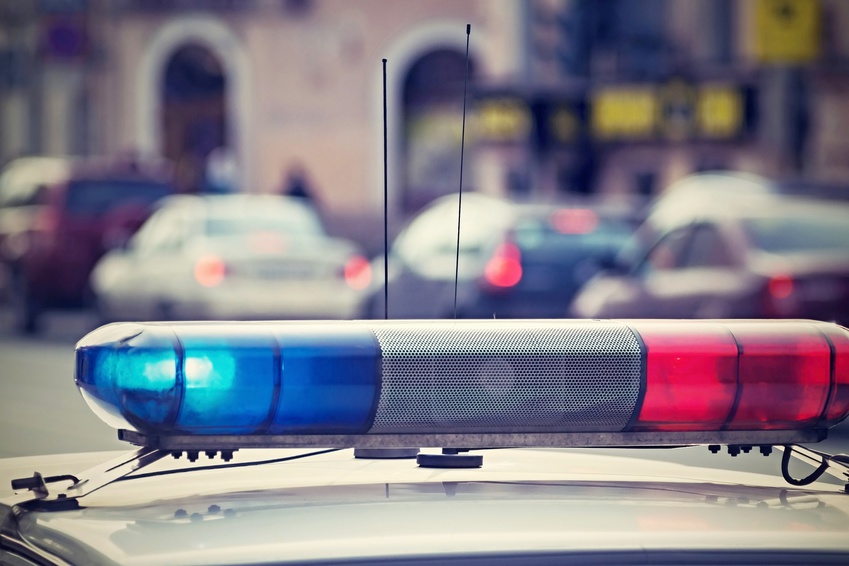 Other than alcohol, speed is the biggest factor contributing to fatal traffic crashes in our country. Yet speeding happens every day on our community streets and we accept it as the norm. In our last article, we told you how speed impacts the safety and quality of life of our communities.

Pedestrians (already the most vulnerable users of our streets) carry the biggest risk. And that risk is increasing. The Governors Highway Safety Association projects the largest year-to-year increase in pedestrian fatalities since it started tracking data in 1975.

When a pedestrian or cyclist is struck by a vehicle, the slower the vehicle speed, the better the chance of survival. Once that speed hits 25 mph, the risk to the pedestrian increases sharply. A study by the AAA Foundation for Traffic Safety found that the medium impact speed for pedestrian fatalities is 35 mph. Not pedestrian injuries; but pedestrian fatalities. Again, 35 mph is above the threshold for what our bodies can take. So slowing traffic speed on our shared community streets—the streets that we live, work, shop and play along—can mean the difference between life and death.

What Can Be Done? 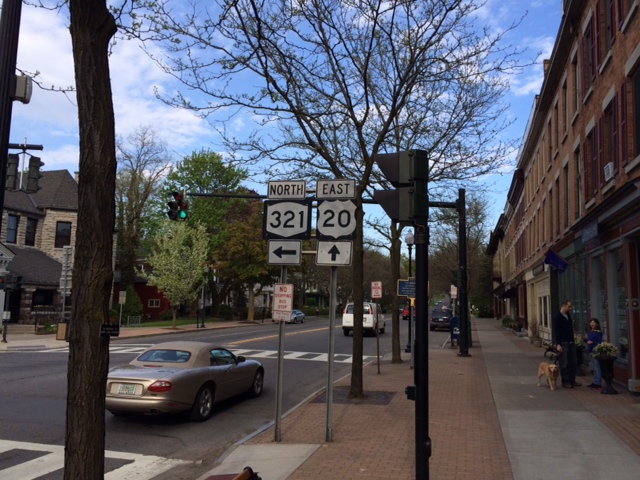 Perhaps the most effective way we can reduce excessive speed on our roadways is to make physical changes to the street that force drivers to slow down and remain alert.

Transportation Specialist, Erik Frisch tells us that traffic calming measures are one of the most common requests City Hall receives from neighborhood residents. “We have been contacted by residents and neighborhood groups in every corner of the city. Whether real or perceived, speeding on residential streets is a major concern for residents city-wide.”

In addition to narrowing lanes and installing speed cushions and bump-outs, towns across the country have also been lowering their speed limits to help improve safety. Some are doing it on an ad hoc basis; others have lowered the overall default limit.

In 2012, Portland, OR reduced the speed limit on 70 miles of neighborhood streets to 20 mph, creating “neighborhood greenways.”

In 2014, New York City got state approval to reduce its default speed limit to 25 mph as part of the city’s Vision Zero initiative to eliminate pedestrian fatalities by 2024.  Mayor Bill de Blasio explained that lowering the speed limit isn’t about cracking down on drivers; it’s about making the city streets safe for all who use them (drivers included). “Lowering the speed limit will save lives

.” Vision Zero depends on “…every New Yorker taking personal responsibility and putting the lives of their neighbors first.”

Will Rochester Lower the Limit? 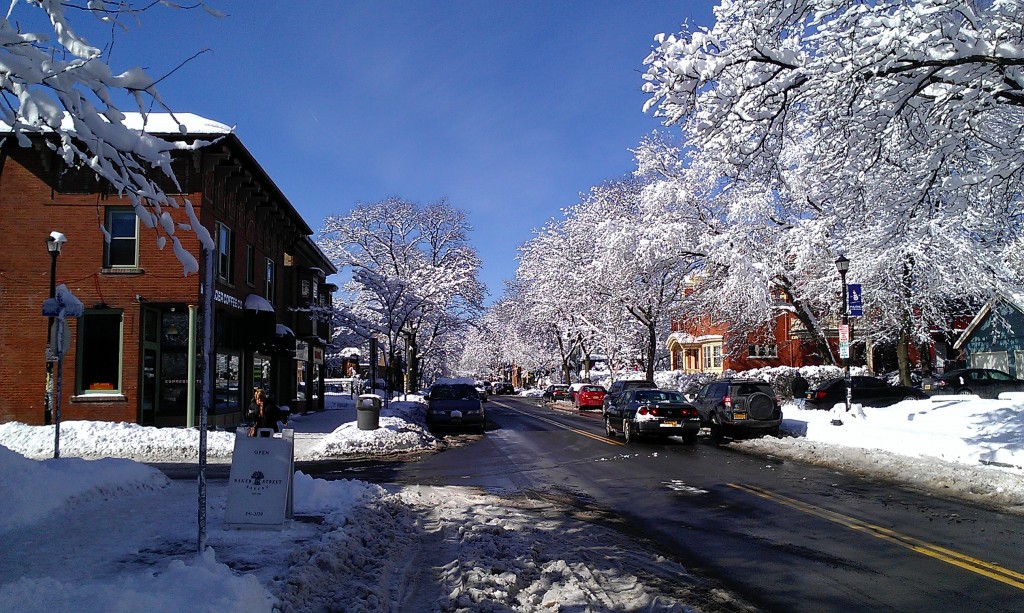 In the City of Rochester, there is increased public interest in lowering traffic speeds, particularly on residential streets.

“There are a myriad of safety benefits from drivers reducing their speed by five miles per hour. One of the primary reasons for reducing the speed limit is to enhance walkability and bike-ability.” The risk of death for a pedestrian hit by a vehicle traveling 25 mph is half of what it is for one hit by a vehicle traveling 30 mph. Frisch adds, “And drivers traveling at 25 mph are better able to avoid crashes to begin with. Vehicle stopping distance improves by 45 feet when traveling 25 mph versus 30 mph.”

Rather than reducing speed limits on a street-by-street basis as requests come up, it is much more cost effective to change the city speed limit as a whole. The current limit is set by New York State Vehicle & Traffic Law. And, like New York City, the City of Rochester plans to seek approval from the State Legislature to change its default speed limit to 25 mph.

If approved, it does not mean that all streets will have a 25 mph limit. “There are major arterial streets in the city where a 25 mph may be impractical to apply—these will likely remain 30 mph,” says Frisch. “Designated park roads will remain 20 mph.”

The Village of Pittsford, which has been plagued with speeding traffic since the NYSDOT widened its roads in the 1980s, is also seeking state approval to lower its default speed limit. “The Village Board has requested that Senator Rich Funke introduce a bill in the State legislature reducing the [Pittsford] village-wide speed limit from 30 to 25 miles per hour,” said Mayor Robert Corby. If approved, the new speed limit would apply to State and Village streets.

Lowering speed limits alone won’t prevent these tragic crashes from occurring. It’s going to take a combination of things (better street design, education, enforcement, etc.) to begin to change the culture of how we use our streets. Whether we’re in a motor vehicle, on a bike, or on foot, we need to always remind ourselves that when it comes to creating safer streets and more vibrant communities, we need to be part of the solution.

There’s a great imbalance between a 2,000 lb. vehicle and a pedestrian. So take it slow out there. The life you save might be your own, or that of someone you love.

2 thoughts on “Lowering Traffic Speed Will Save Lives”