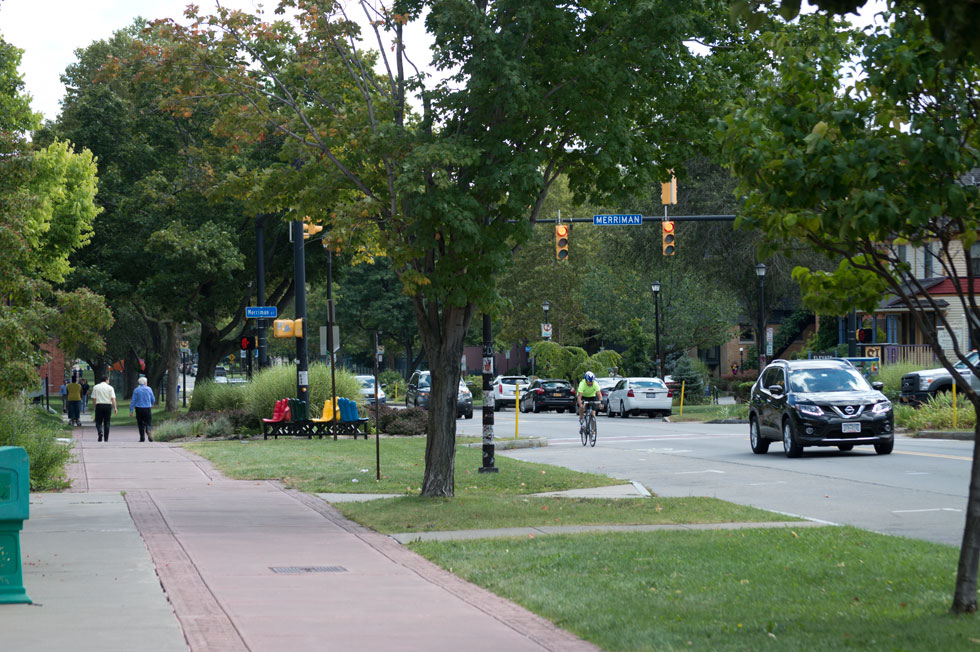 Last week, the Surgeon General put out a call to action to help Americans live healthier lives by encouraging them to simply walk more. The aim of the Step It Up campaign is to make our communities more walkable, acknowledging that one of the biggest barriers to walking is a built environment that lacks safe and convenient places to walk.

If you ask most people in this country what our streets are designed for, they will answer “cars.” And they’d be right. Roads have been widened to accommodate more and bigger lanes. Elements like sidewalks, trees and landscaping were removed to make roads straighter so drivers could go faster. Street corners were rounded, so drivers could turn without slowing down much. In most places, drivers can turn right on red, making it nearly impossible for pedestrians to cross at busy intersections even when they have the light. Parking in most shopping areas is right out front, limiting the possibility for people to mingle with each another and their surroundings at street-level.

But drivers aren’t the only users of our streets. And when drivers get out of their cars at their destinations, they are pedestrians. More and more communities are making changes to their streets to make the quality of life better and safer for all the people who live, play and work along them.

The addition of sidewalks, bike lanes, trees and things to walk and bike to are a vital part of making our communities more walkable. But designing those streets so that drivers are more alert and drive more cautiously and courteously along them is necessary for making our neighborhood streets safer for all (including drivers) who use them.

Pedestrians are the most vulnerable users of our streets. And vehicle speed has a huge impact on what happens if there is a crash. Only 1 in 10 pedestrians hit by a car traveling 40 mph will survive. When that speed is reduced to 30 mph? Half survive. At 20 mph? 9 out of 10 survive. Those statistics are more dire when those pedestrians are young or old.

Design measures that impact driver speed are collectively known as “traffic calming.” Traffic calming is a community-oriented approach that aims to make streets safer by designing them to impact drivers’ perceptions of and behaviors along those streets.

The Institute of Transportation Engineers defines Traffic Calming as: “The combination of mainly physical measures that reduce the negative effects of motor vehicle use, alter driver behavior and improve conditions for non-motorized street users.”

As the Project for Public Places explains it, the aim is to “balance traffic on our streets with other uses. It is founded on the idea that streets should help create and preserve a sense of place, that their purpose is for people to walk, stroll, look, gaze, meet, play, shop and even work alongside cars – but not dominated by them.”

The good news is that you don’t have to bulldoze our neighborhood streets and start over to make them safer for all. Traffic calming is an inexpensive and flexible way to work with what you currently have. It can be as simple as painting lines, hosting a street mural, adding parking and installing planters; and as elaborate as adding medians. And it is easy to test more drastic permanent changes with temporary removable materials first. 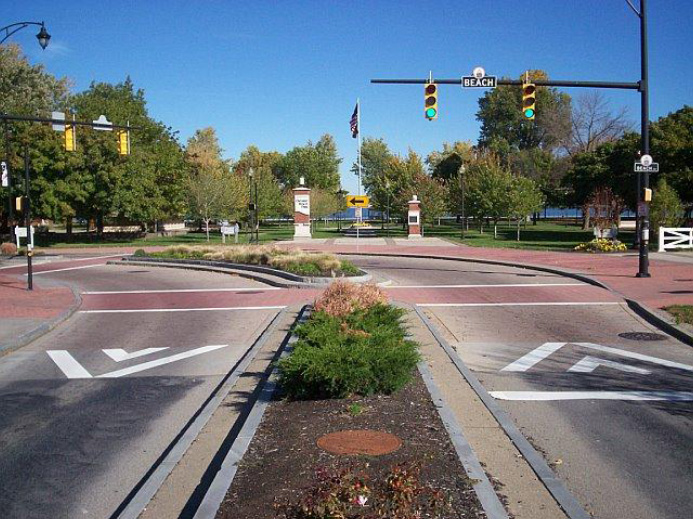 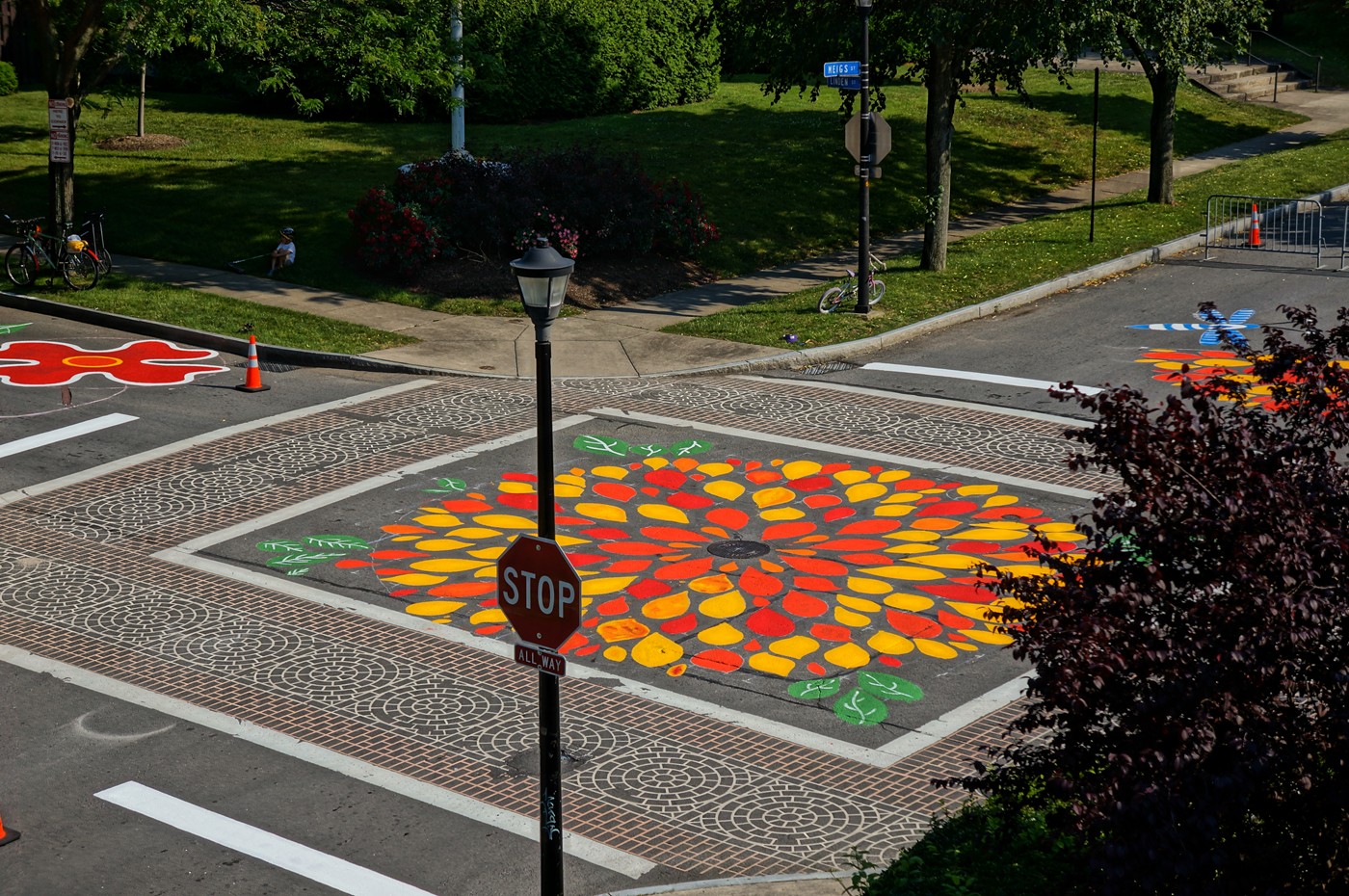 “BoulevART” street mural on the pavement at the intersection of Meigs & Linden. [Source: Highland Park Neighborhood] 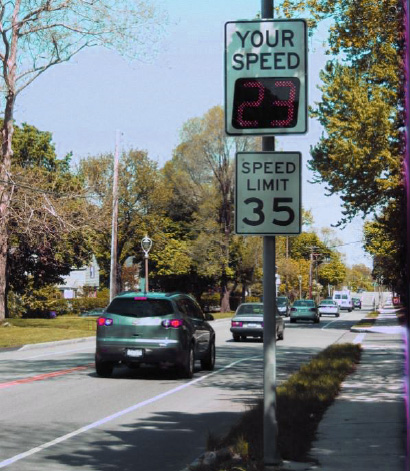 Not all traffic calming measures are physical. Some measures simply signal to the driver that they are encountering something different, which slows speeds — like gateways on either side of the road when entering a neighborhood or village.

The City of Rochester’s Neighborhood Traffic Calming Manual outlines a variety of design measures that can be explored, such as:

Keep in mind that not all measures are appropriate for all streets. Emergency vehicle access, bus routes and snow removal are considerations. The city’s manual details the effectiveness, advantages & disadvantages of each measure.

Why not just lower the speed limit?

Lowering speed limits is a great start. But lower speed limits alone can’t really make people drive more cautiously and slower, unless there is a speed camera or police officer enforcing that limit. The best way to make drivers slow their speed is through street design.

Why not just put in a stop sign or traffic light?

Stop signs and traffic signals control traffic flow, but they aren’t necessarily a safety measure for pedestrians. Many drivers drive through stop signs or race to make a green light. Traffic signals and stop signs do make drivers slow down temporarily, but those drivers speed up again to what is the norm along the roads between signals.

The design of the street is the best way to impact driver behavior and make our community streets safer for all who use them.