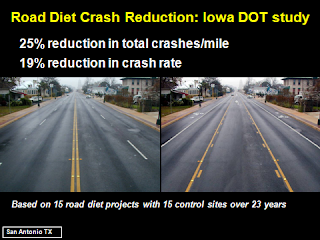 I’ve been in contact with Steve Clark, who works for Transit for Livable Communities in Minneapolis and is highly respected in the Minneapolis cycling community. He notes that they are seeing an increase in all year bike commuting as well as an overall increase. One third of Minneapolis bike commuters are now cycling year round as born out by the bike counts. Minneapolis’s bike commuting rate is 4.2%, Ottawa’s is 1.9%, Toronto’s is 0.8%. Minneapolis built the lanes and trails and they cycled.

Steve also gave me two terrific links that are used to educate the public as well as maintenance personnel on winter street care. He recently completed an all day workshop with street maintenance workers and the have bought into the program as well and some are now cycling. These are enclosed below.

Steve also attached his research on winter riding. “What we have found is that winter riding is especially high on commuter routes. Not so high on paths that have high rates of recreational use during the summer months. Based on all of our counts, we conclude that nearly a third of regular bike commuters continue to bike during the winter.” He also sent us a nice 4-3 conversion image shown here. Scott