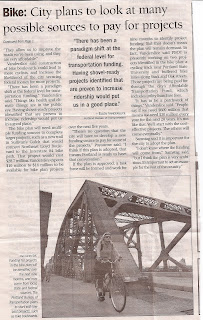 The Portland, Ore. City Council recently approved a 20 year cycling plan which is very ambitious (site below) . The plan reaches far but has the strong backing of Mayor Sam Adams (he’s former Head of Portland Transportation) and the city council with unanamously approved it. The mayor in his recent State of the City address announced that they want to increase their bicycle commuting rate from 6.5% (the nations highest) to 25% over the next few years. The Daily Journal of Commerce, the local business newspaper reported on a projection to spend $600 million Yikes! over the next 20 years on the bike plan, and they will need to tap multiple sources including the city’s general transportaion revenue, Oregon Dept. of Transportation and the federal government are prime resources which they’ll need to work with.
I spent some time at the site and it has a wealth of information on their planning and implementation process. The plan is rich in detail and can be helpful giving us an idea of how they approached and plan to approach their growth. The “Executive Summary” in the Introduction section nicely summarizes things.
http://www.portlandonline.com/transportation/index.cfm?c=44597
I also found it insightful to look at their application (included below) to the League of American Bicycles which povides a great deal of detail on how they have made their city bicycle friendly. There is a lot of concrete information on what they did to become the first city in the US to get the first Platinum Bicycle Friendly Community status. Check it out. PS Ave. temp. in Portland in Jan. – 41 degrees F. vs 25 degrees F. Rochester & we’ve got more of that “Pesky Snow”. More on that later.
http://www.portlandonline.com/transportation/index.cfm?c=50736&a=194342