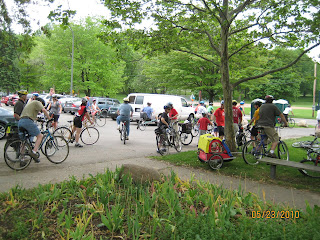 On Sunday, May 23 at 1 PM in Cobbs Hill Park, over forty bicyclists began a bicycle boulevard demonstration ride through the Upper Monroe neighborhood in Rochester, New York. They were not racers, or members of a single bicycling club, or recruits for a charity ride. They were just ordinary folks finding out what a bicycle boulevard would look and feel like in our area.

Maybe it is a harbinger of things to come. Portland, Oregon’s next generation bicycle boulevards is already achieving what we are attempting here: “A low traffic volume and low traffic speed street where bicycles, pedestrians and neighbors are given priority.” Already, this concept is being introduced as one of the choices for the Bicycle Master Plan being developed by the City of Rochester and the county of Monroe.

Preparation for this demonstration ride began almost a year ago by choosing a neighborhood properly situated near the heart of the city, en route to popular generators. A generator is a destination that attracts traffic, like a supermarket, a city center, a theatre district, or, in Rochester’s case, its wonderful network of trails (including the New York State Canal Trail) which come to a hub at Genesee Park.

For this specific demonstration ride, a route from the Upper Monroe neighborhood was mapped out and temporarily signed, pointing out each turn of the ride. When fully developed, this bicycle boulevard would not only have permanent signage, it might have many other features like auto speed reduction, auto traffic reduction, and various changes to make crossing busy streets easier and safer. (http://www.bta4bikes.org/) Ultimately, Upper Monroe bicycle boulevards would be linked to a series of other boulevard routes throughout all our neighborhoods providing safe and enjoyable routes that make our neighborhoods more neighborly. Not to mention fewer fossil-burning vehicles, fewer ozone alert days, and a lighter impact on climate change.

What might tip the community from one that views bicycles, walking, and public transportation as peripheral ways of getting around to a city that is designed specifically around these transportation options? Maybe we could take our lead from Portland, Oregon, pack up all our influential community leaders, and send them to Boulder, Colorado or The Netherlands and let them see how they do it. Don’t laugh, it’s been done—and it worked!