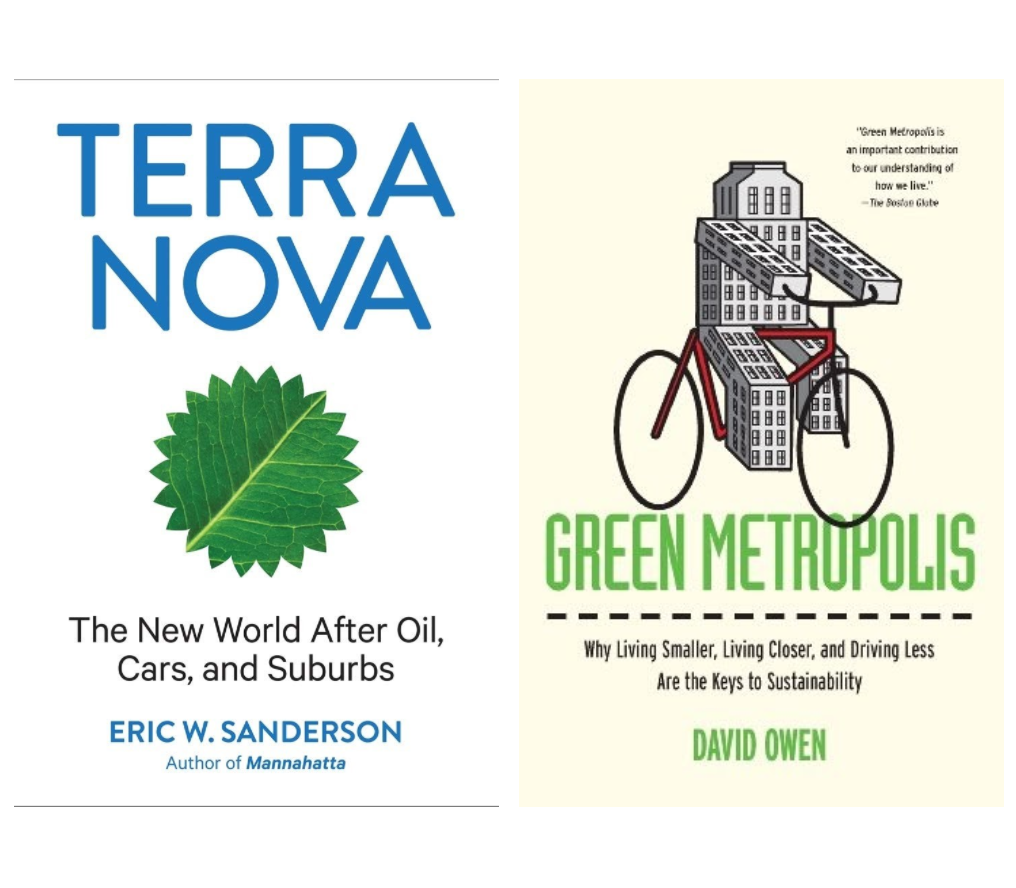 In past blogs, I’ve mentioned how Reconnect Rochester’s ROC Transit Day inspired me to try getting to work on a bike for the first time. I’m so grateful to Reconnect for providing that initial inspiration. I owe further credit to Howard Decker’s blog which introduced me to Eric Sanderson’s book, Terra Nova: The New World After Oil, Cars, and Suburbs. If ROC Transit Day got me on a bike for the first time as an adult, Terra Nova kept me on my bike. When the only car I’ve ever had bit the dust while reading this book, I was so inspired by what I was reading that I donated my car to charity and haven’t had a car since.

I’m a bookworm concerned with climate change and on occasion I tackle thick, scholarly books. Maybe due to its length, Terra Nova isn’t for everybody, but to this day it’s the best non-fiction book I’ve ever read. I highly recommend it! In 2015 I was pleased to discover a great companion piece to Terra Nova: David Owen’s Green Metropolis, a very similar book which is shorter and more readable for most people. Together, these two books examine what got us into this climate mess and how we can get out of it. When one learns about our climate crisis, it’s easy to get discouraged. These books however offer a doable approach that leaves you feeling hopeful and encouraged. We can do this.

What both authors make clear is that a cleaner, sustainable future requires an investment and turnaround in three areas of life: energy, land use and transportation (and more generally, our habits). One can pay quite a bit of attention to the climate movement and really only hear about energy, as if all we need is a simple 1:1 substitution between gasmobiles and electric vehicles (EVs); between natural gas and solar. But it’s not that simple. As Evan Lowenstein of The Climate Accelerator points out in this recent blog, tech alone like EVs and solar won’t solve our problem. Part of that is due to energy load: “A million drivers plugging in their cars when they get home from work…would strain the power grid.” We’re simply not ready for that. Besides, fuel efficiency just incentivizes driving more. And we don’t need more traffic and traffic deaths. Status quo car-dependency and the enormous health and financial costs that go with it aren’t the way forward.

The other reason is because as Owen states, “the power we don’t use is more important than the power we do.” Take hot summer days for instance. Nowadays when we’re hot, “we adjust the thermostat rather than identifying the source of the problem and looking for a low-tech remedy.” Let’s instead do “what our parents and grandparents did: opening windows at night, to cool the entire house, then shutting the windows in the morning and drawing the curtains in the sunny rooms, to keep them from rapidly heating up again.” I’ve found that this works on all but the hottest Rochester days. In the same vein, the transportation power we don’t use is more important than what powers our vehicles.

“The transportation power we don’t use is more important than what powers our vehicles.”

Similarly, “we must significantly reduce the number of miles we drive, not merely replace one motor fuel with another one.” As Owen reminds us, “the main job of any car is moving the car itself.” Driving is the least energy-efficient way of getting around and society must start discouraging single-occupancy car trips by making it costlier and less pleasant (and by making the alternatives faster, reliable and more pleasant). We respond to incentives and disincentives. “In the long run, miles matter more than miles per gallon. A  car’s fuel gauge is far less significant, environmentally speaking, than its odometer.”

Perhaps your workplace is too far away to walk, bike or take a bus to. Okay, you’ve gotta drive. But what other regular destinations are near your home? (The grocery store, library, pub, kids’ school, etc.) Sanderson estimates that most people are willing to walk to destinations within a half-mile, bike or scoot up to 2.5 or 3 miles, and take transit to destinations within 5 miles. That’s a great place to start! Reconnect Rochester’s 20 Minutes by Bike map shows where you can get to from downtown Rochester in 20 minutes riding at a casual pace. (Stay tuned to our blog for more area maps to come!)

We must also “contract the distances between the places where people live, work, shop, and play.” This is where land use comes in. Mixed-used development and zoning changes are crucial. This does mean reimagining the suburbs a bit. Both authors make clear that the suburbs as we have known them in terms of car-dependency, can’t last. The societal and environmental costs are too great.

Finally, we’ve gotta deal with our overconsumption. “The average American single-family house doubled in size in the second half of the twentieth century” as family sizes plummeted! Rather than move every seven years to an ever-larger house farther away (only to fill it with more stuff and become even more car dependent), we would do well to develop a philosophy and “economy of enough” as climate activist Naomi Klein notes. Check out Rochester’s old trolley neighborhoods, where most lots don’t have original garages since residents used to walk to the end of the street and take a trolley every morning. Because today’s bus routes still more or less follow those old trolley lines, these neighborhoods have pretty reliable transit.

As you can see, whether it’s resisting the temptation to blast your AC all the time, biking to a destination, or choosing to live closer to work (Rochester remains one of the most affordable communities in the country to live car-free), Americans will have to change habits to meet the climate crisis. We’ve gotta go beyond focusing on what powers our stuff and reexamine how we settle and how we move. It’s important to note many of these lifestyle changes aren’t sexy. Rather than being high-tech and Jetsons-esque, many solutions to the climate crisis are old-school and therefore sustainable footprints and everyday life will look much like how our great great grandparents lived: That’s a good life!

Watch Saga City for more on the crucial role of land use and transportation in building a sustainable future.