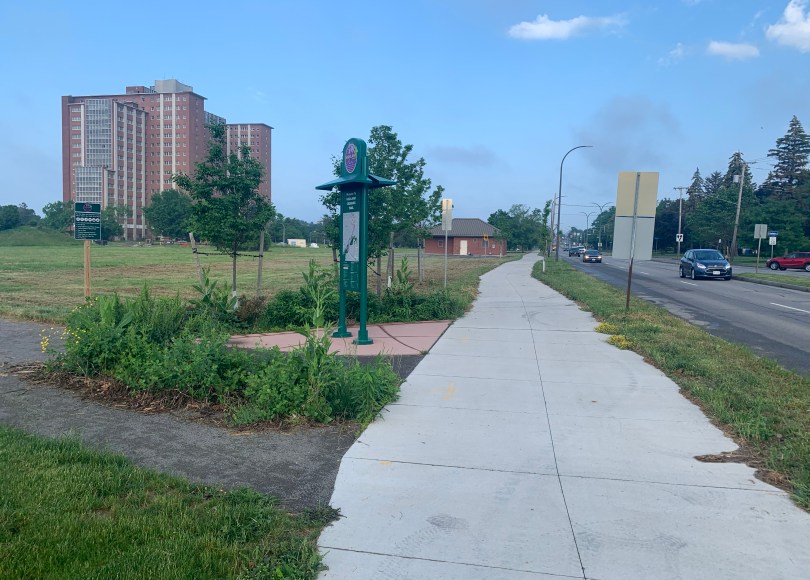 Over a year ago, I was excited by the opening of the long-awaited Highland Crossing Trail, providing a mile-long connective path that is now a section of my daily bike commute. The path is just a part of a decade-long planning effort to create a pedestrian and bike trail that connects the Empire State Trail (formally the Erie Canalway Trail) with the Genesee Riverway Trail via the Olmstead-designed Highland Park. And while I am thrilled with the collaborative effort between Rochester and the first-ring suburb of Brighton, there is a significant piece of this trail that isn’t the traditional definition of a trail at all.

Enter the “double-wide” sidewalk, which, for an urbanist, is like dreaming of a Trek bike and getting a Huffy instead. You didn’t get what you wanted, but at least you got something. And hey, I’m not hating on the upgrade… I’m a firm believer in acknowledging every victory, no matter how small. Just because we don’t get what we ultimately wanted out of the gate doesn’t mean we, as advocates, aren’t making progress.

The double-wide sidewalk can, theoretically, safely and comfortably accommodate pedestrians and cyclists, and can be a useful and inviting step in welcoming more people on foot and on two wheels. The problem, of course, lies in the “left-hook” scenario, when drivers turning left into this “path” are hyper-focused on sneaking through two lanes of oncoming car traffic, ignoring the possibility that a pedestrian or cyclist who has the right of way may be approaching crosswalk. This is even more of a hazard for cyclists who travel at a higher speed than pedestrians, creating an issue of sightlines for the driver turning into the path. But this issue can be safely mitigated with a few practical steps.

For cars turning left into the mixed-use path, a left-hand turn arrow is essential in protecting cyclists and pedestrians using the crosswalk. A red arrow ensures that, when path-goers have the signaled right of way, drivers cannot turn into them.

Think about when you are behind the wheel, turning left across two lanes of oncoming traffic. Your focus is on the cars coming at you as you measure that gap in the traffic, seeing when you can step on the gas and make your left. On a busy road at rush hour, you might only have a momentary break in traffic… you have to take advantage! But how often do you look beyond the two lanes of traffic to see if there is a pedestrian or bike entering the crosswalk? Think about it… anyone entering the crosswalk at this point has the right of way, just like car traffic traveling straight through the green light. You, as a left-hand turner, must yield to sidewalk users as well when you make your left turn.

A red arrow controls left turns for cars when pedestrians have the right of way, restricting the potential for conflict when the car turns into the double-wide sidewalk.

Sidewalk Signals Change With Traffic, Not A Push Button

This is a big one for me. In major metros and downtowns, pedestrian crosswalk signals change with the traffic lights, removing the “please sir can I have some more” ridiculousness of the “beg button” scenario where pedestrians have to physically ask permission to legally receive a signal to cross a road. When implementing a double-wide mixed sidewalk, pedestrian/cycling signals should ALWAYS change with the traffic light. If a car is traveling northbound and has a green light, but a pedestrian traveling northbound has to push a button for the pedestrian signal to say she can cross, you’re doing it wrong. EVERY pedestrian crosswalk in today’s society should change regardless of whether someone pushes that stupid red button or not.

In all seriousness, the whole point of turning a sidewalk into a mixed-use trail is to create greater clarity around the prioritization of the pedestrian and the cyclist. And the scooter rider, and skateboarder, etc. Our pedestrian/wheeled trail user should be able to indulge in this prioritization without pushing a beg button.

If All Else Fails, Do The “Look Back”

As a pedestrian, bike and micro-mobility advocate, I don’t get in the habit of telling people to protect themselves against cars. Instead I bring to light the over-prioritization of the automobile and the need for drivers to share the road and show respect for those who aren’t protected by two tons of steel. That being said, in the case of the double-wide sidewalk, I would encourage users to “look back” to see if a driver is about to turn into you before and during your journey through the crosswalk. As much as I hate that we have to do so, a simple glance to see if a car might be left-hooking into our path as we cross a driveway or roadway is a small and essential step, ensuring our safety. While we must continue to place the onus on drivers to be more aware, and on designers to create safer streets, we must concede that this will take time. In the meantime, let’s be sure to take this simple step so that we can protect ourselves.

Double wide sidewalks can be a valuable “meet half way” step in connecting a robust trail network. But the purpose of a connective trail is to provide those of us on two feet and two (or more) wheels a safe, welcoming and enjoyable experience… most of all, one in which cars don’t pose a threat. Simply widening a sidewalk does little to achieve these goals. We must adapt traffic patterns and signaling if these efforts are to truly be considered a viable “improvement.”