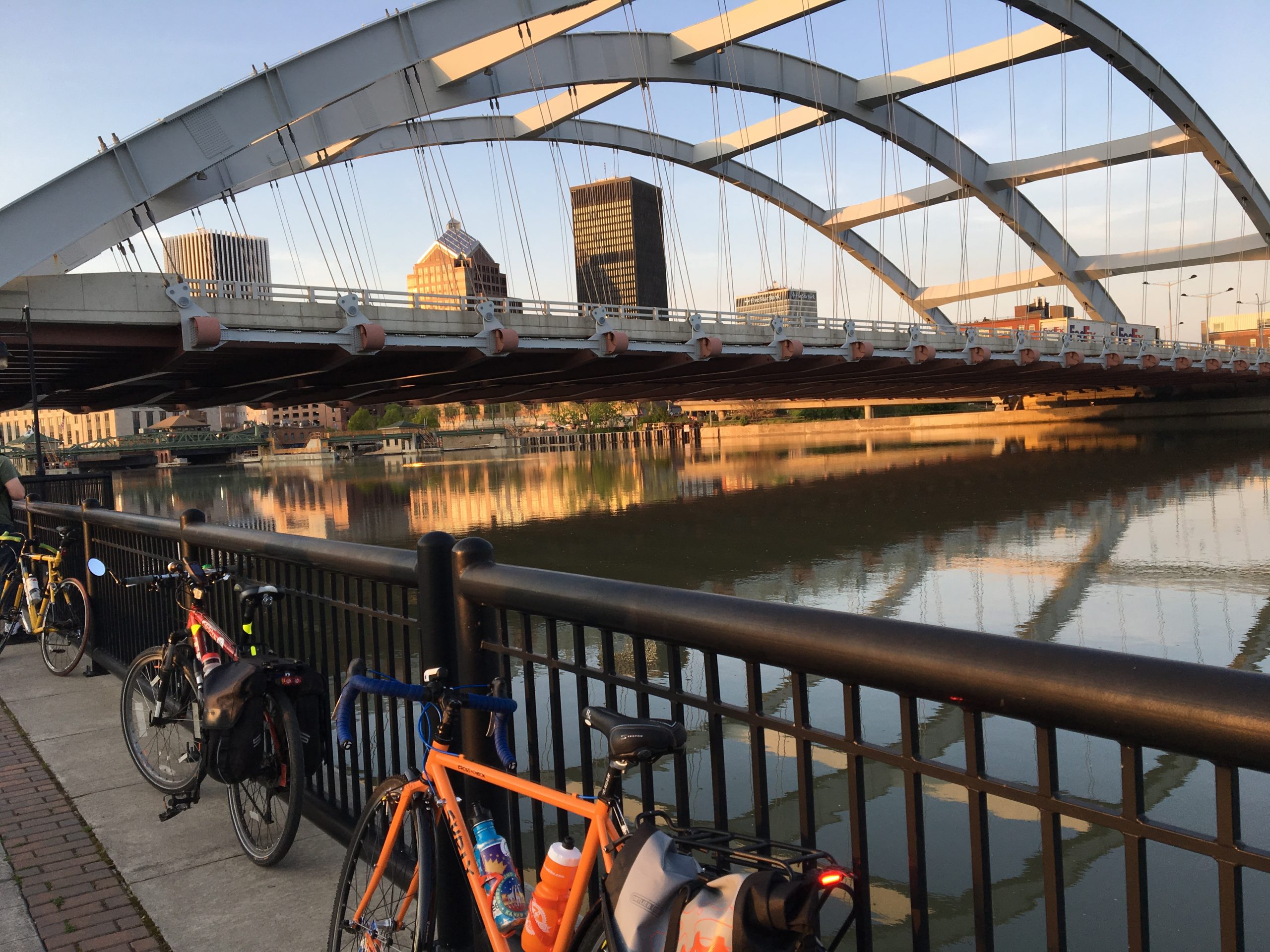 “The bicycle is in many ways the easiest solution to a multitude of problems.” – Anna Brones in Hello, Bicycle

As a bicycle instructor, I love teaching bike classes and presentations in our area. (If you want to book a lunch n’ learn presentation for your workplace, library or community group, let me know at cycling@reconnectrochester.org). Before going in depth on any subject, I spend a few slides at the beginning highlighting the benefits of biking. It’s not enough just to tell people how to bike safely. You have to inspire them to bike in the first place. There are powerful financial, health and environmental benefits that accrue from biking. And although it only takes one of these reasons to get on a bike, you and society will benefit in a variety of ways for doing so.

My hope with this blog is not only to “preach the cycling gospel,” but to familiarize readers with Rochester’s goals and policies, particularly its groundbreaking Rochester 2034 Plan. As I’ve gravitated towards bike advocacy in recent years, I was pleased to discover that my hometown also sees the benefits of getting more citizens on bikes. The City of Rochester has many plans in motion to better our city and many of those plans incorporate getting more people on bikes.

In line with New York State, Rochester adopted its own Complete Streets Policy in 2011, in which it “recognizes that our streets should accommodate a wide range of transportation modes…Our streets are a reflection of our community…” According to the most recent US Census Bureau American Community Survey five-year estimates (2017), 25.3% of all households in the City of Rochester do not have access to a private vehicle. In some neighborhoods like JOSANA, over 46% of households do not own automobiles (Source: JOSANA Study).

The City defines a complete street as one that “accommodates all users, including pedestrians, bicyclists, transit users and persons with disabilities.” Moreover the recent 2034 Plan expresses clear concern for “an overly car-dependent culture” and acknowledges that residents want choice when it comes to transportation.  “The City’s statement of support for these values helps set the bike community up to advocate for specific projects and improvements.

Each fall, the American Automobile Association (AAA) puts out an updated estimate of the average annual cost of car ownership. As anyone who’s ever owned a car knows, this cost goes beyond just paying for the vehicle itself: interest, insurance, gas, maintenance, registration and depreciation add up considerably. Though we can expect Rochesterians to spend less than the average ($9,282 a year for a new car), in a city where the per capita income is well below the national average, $6,000 or more a year to spend on a car is too big a piece of the household financial pie. By biking for some trips, Rochesterians can save serious money.

In addition to the financial burden cars impose on households, we also need to recognize that society loses money from prioritizing and incentivizing car travel. As our friend Arian Horbovetz points out so well, every form of transportation is subsidized. No form of transportation pays for itself. It stands to reason then that municipalities, especially those with limited funds in hard times, ought to prioritize infrastructure funding for modes of travel that are available to everyone, not just those who can afford to own a personal vehicle.

“It is pure poetry that a 19th-century invention is capable of solving complicated 21st-century issues.” – Mikael Colville-Andersen in Copenhagenize

As Lynn Richards, the President & CEO of the Congress for the New Urbanism, told us last year in her Reshaping Rochester talk for the Community Design Center, downtowns with abundant, cheap parking have city halls that struggle to pay the bills. A frequent line from those administrations is “Yeah, [your idea] is great but we don’t have the money.” Vibrant downtowns use valuable urban real estate to make money, put a price on parking and incentivize other modes of travel. Next time you hear someone say good bike infrastructure is too expensive, remind them that “One mile of a protected bike lane is 100x cheaper than one mile of roadway” and that by prioritizing cars, they are prioritizing the mode too many residents can’t afford.

As Peter Walker points out in How Cycling Can Save The World, “the health incentives for cycling massively outweigh the perils…Every year about 700 Americans die on bikes, a figure that could and should be significantly lower. But over the same period at least 200,000 of their compatriots die from conditions linked to a lack of physical activity.” And don’t forget that “more Americans have died in car crashes since 2000 than in both World Wars.”

Moderate biking “has been found to have an almost miraculous effect” on health, “in part because it is so easy to incorporate into everyday life…Cyclists don’t just get extra life years, they’re more likely to remain mobile and independent into older age.” A recent UK study found that bike commuters had a 46% lower risk of developing heart disease and a 45% lower risk of developing cancer.

UC Davis found that if only 14% of urban trips worldwide were taken on bikes, we’d reduce emissions enough to meet the Paris Climate Goals. This is so doable! If people used their cars for when the weather was bad, when the distances are too long and when there’s more than one occupant in the car, we’d live in a different world. If you only hopped on a bike for short solo trips in good weather, it’d make a massive difference.

By the way, any idea where the most polluted air is concentrated? Where the unhealthiest air is to breathe? It’s around our schools every morning and every afternoon. “Pick-up and drop-off times create clouds of invisible yet toxic diesel fumes” as buses idle.

Anytime we advocate for safer, more equitable streets and better bike infrastructure, we need to point to Rochester’s goals and plans and how the whole community will benefit from encouraging bicycling. And when City Hall delivers, let them know your appreciation!

Join us for a virtual screening of the inspirational Dutch film Why We Cycle on Thursday, September 10, 6:30 – 8:30 p.m. on Zoom. Following the film, there will be a live panel discussion with community leaders and advocates. We’ll use the film as a springboard to reflect on how we can get more Rochesterians on bikes. See event details and register at www.ReconnectRochester.org/streetfilms.

“The Dutch and their bikes are inseparable. It’s not a form of transportation, it’s a way of living.” – Holland.com guide for visiting the Netherlands