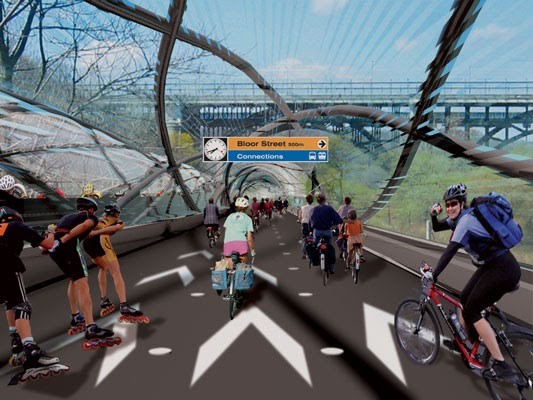 In 2009, I came across an online article that changed my life.

It described an enclosed cycleway envisioned for a network of cycleways to run above and through Toronto, Canada.  Not only did it promise year-round human-powered access to the entire city, but because each tunnel was one-way, your ride in each direction would be downwind, thanks to the breeze created by your fellow travelers.

It was (and is) a beautiful vision, but untested and unlikely to be implemented. It occurred to me that Rochester, NY could be a great testbed for a simplified version.  As a professor of innovation at RIT, I have always been mystified by our neglect of the potential North-South corridor that runs from RIT to UofR, crosses the Erie Canal, continues to Downtown, High Falls, Turning Point Park, and Lake Ontario.  An enclosed cycleway from RIT to High Falls could reintegrate town, gown, and city, could highlight the nation’s preeminent urban waterfall, and could reframe Rochester’s wintry weather as inspiration for ecological innovation. It would “create a revolutionary all-weather alternative energy transitway for bikes, e-vehicles, joggers, and skaters that will reduce road traffic and parking pressures on our campuses, create a year-round recreational attraction for locals and visitors from around the world, and put us at the forefront of the new energy economy.” (Rochester Greenway Whitepaper)

It was a no-brainer! I dubbed this the “Rochester Greenway” before I understood that the Genesee Valley Greenway was a pre-existing natural extension pointing South.  I created postcards and a website to promote the idea.  I presented a model and a poster at RIT’s innovation festival. I was all in.

After meeting with the Genesee Valley Greenway people, former Rochester Mayor Tom Frey, Frank Regan of the Rochester Environment newsletter, and City engineers, I wrote a whitepaper.  On the one hand, it shows that I wasn’t completely out of touch with reality.

“By merely endeavoring to pursue this vision, we can help revitalize Rochester’s reputation for technological and social innovation, stimulate collaboration and synergy between our urban and academic communities, create jobs, and attract funds to the region.“

On the other hand, I was pretty far out there.  For example, the whitepaper’s aspirational “Brief History of the Rochester Greenway” told the fictional but heroic story of how, in a few short years, the Greenway became a reality, concluding…

“….the Greenway grew, and helped make Rochester  a world leader in sustainable technology consulting, a leading exporter of ultralight e-vehicles, and a hotbed of economic development.  The Rochester Renaissance was driven, in part, by the entrepreneurial young that the Greenway initiative attracted, inspired, and nurtured.   Grey haired,  energetic, and fit, the pioneers still ride the Greenway and the Erie Canal Crossway, accompanied by e-boarding grandchildren.  Even now, they wear Greenway Transit Tokens as badges of honor.“

As if!  In reality, everyone responded with politeness, good-humor, and (I now realize) forbearance.  They understood, as at first I hadn’t, that Rochester’s cycling community was small, that cycling here was generally unappreciated, and that the city didn’t do anything radical.  It would take a culture change for something like this to happen.

Which is how I became a cycling advocate, and co-founded the Rochester Cycling Alliance with Richard DeSarra.

At our first meeting, Frank Regan introduced Richard as Rochester’s go-to cycling guy, a principal of the Rochester Bicycling Club, and the hero who made bike racks a fixture on Rochester buses(!).   However, when I suggested that there should be a Rochester Cycling Alliance to advocate for cycling culture, Richard was not enthusiastic: “been there, tried that.”

I couldn’t let the idea go.  On the 2009 International Day of Climate Action, a cadre of biking enthusiasts rode from the Downtown Library along the river to UR, traversed the Lehigh Valley North Trail  and converged on a Rochester Cycle Summit at RIT’s new Center for Student Innovation, where an ultra-wide screen video summarized everything I had learned about Rochester’s potential as a world capital of biking. (I urge you to watch the video.  In my humble opinion, it’s still a mind-expanding review of what we could do here!)

At the end of the meeting, I asked people to comment on “possible next steps.” To my surprise, Richard stepped up:  “I’m joining the Rochester Cycling Alliance.”  And so it began.

Over the years, Richard chaired the Rochester Cycling Alliance’s monthly meetings, and we became the City’s leading advocates for Richard’s signature phrase: “Bicycling as Transportation.”  Rochester now has bicycle lanes, bicycle boulevards, and bicycle advocates.  The Southern edge of the Inner Loop is gone, and in its place we have protected bike lanes and greenspace.  The Northern Loop may go soon.  The Roc the Riverway initiative is underway.  A new Skatepark is nearing completion.  That’s all terrific news and significant progress.

I know Richard DeSarra would be proud of our development.  Just a couple months after his passing in September 2019, the Rochester Cycling Alliance joined forces with Reconnect Rochester, our local active mobility organization.  The RCA gets better every year at increasing accessibility to biking and the local push for complete streets is strengthening.

But we still don’t do anything radical.  We still haven’t embraced a systemic vision of a human-centric, active-transportation, family-recreation network.  We still haven’t faced up to the urgent need for climate action, even though the climate crisis is now upon us.  Instead, we continue to make worthwhile incremental roadway improvements on a site-by-site basis.

Just last week I saw a preview of the City’s plans for reconstructing State Street.  Good news: bike lanes will connect the Riverway trail to the Gateway to High Falls under the Inner Loop.  Bad news: the proposed bike lanes are mere markings between parked cars and busy traffic.  Parents and children who can bike 5 miles along our beautiful Riverway, will be turned back at the very threshold to the nation’s most substantial urban waterfall and (potential recreation area!).

It’s not too late.  Bold visions help create new realities (even if the realities differ from the vision).  We are in a moment of societal flux when change is possible, and desperately needed.  Let’s make the most of it!