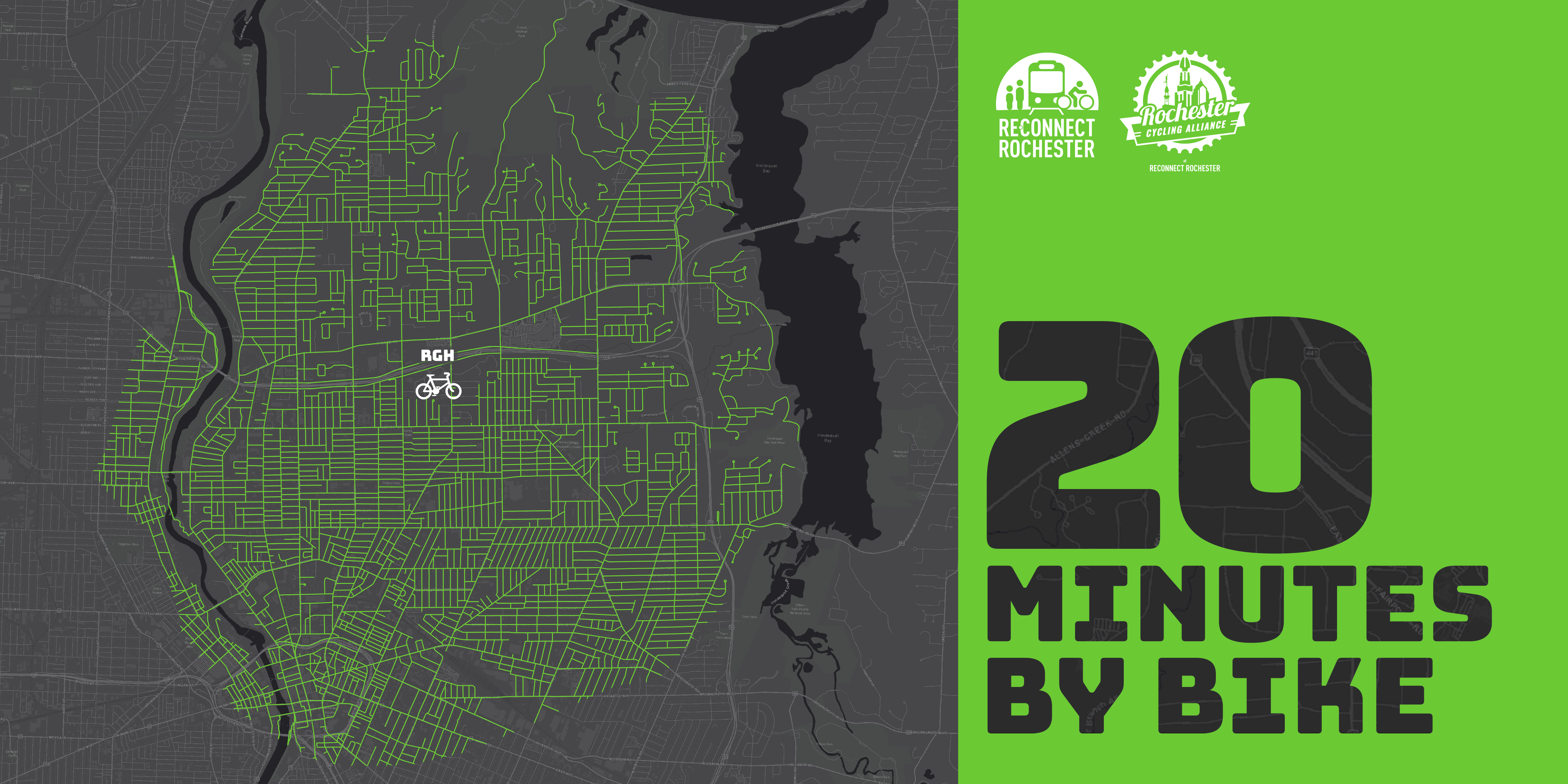 Presenting the fifth in a series of custom “bike shed maps.” For this next installment, we chose Rochester General Hospital (RGH) and are showing how far out in every direction you can get on a bike at a casual but steady pace of 10 miles per hour. This means that if you live anywhere in this green area, you can get to RGH within 20ish minutes on a bike or scooter. Thanks again to Brendan Ryan and Mike Governale for their help putting these maps together for us.

To get us familiar with this green territory surrounding RGH, here’s Dr. Gerald Gacioch sharing his personal travel-by-bike experiences.

I am a doctor at RGH and have been biking to work for the past 15ish years. I am not comfortable riding before sunrise or after sunset (despite bright lights and neon clothing) so my bike to work season is usually late-April to mid-September. There is really nothing like the feeling I get when my workday starts with a ride instead of the usual car commute on 490 (cycling is sort of a cross between Rocky running up the library stairs and a tranquil Zen master). I live on the border of Pittsford and Fairport. My route is Rt 31 to Schoen Place to Rt 96 past Nazareth to Fisher, left onto East Ave (GREAT new bike lane!) to University to Culver to Norton and Portland. The whole way is very safe and now has a bike lane almost the entire route.

Here are some of the lessons I have learned from now hundreds of days of bike commuting:

One of the best things that Rochester has to offer in terms of bikeability is its ongoing Bicycle Boulevards implementation. Back in 2015, the City identified priority routes that could be used by cyclists to navigate the city. This year the City is implementing 20 miles of this network! Bike Boulevards are mostly residential side streets that parallel busy, sometimes intimidating roads. Over time, traffic calming measures like speed humps will be installed to slow down or even deter car traffic along these corridors, keeping the experience as comfortable as possible for cyclists of all ages and abilities. Wayfinding signage will also be added to help cyclists navigate. One of the best kept cycling secrets in Rochester is that you can use these routes now, even if they haven’t been technically converted to Bike Boulevards yet. See the purple dotted routes below.

As always, no quality level or amount of bike infrastructure will ever alleviate the need to have some basic traffic-negotiating skills under your belt. Sometimes biking on a major road is unavoidable for a block or two, and even if you stick to comfortable Bike Boulevards, you’ll still have to cross major streets. So stick to these general principles and if you want to get more comfortable and confident on your bike, take one of Reconnect Rochester’s classes sometime.

Biking (or scooting) to RGH along Bike Boulevards from the South, you get your own easy, private entrance to the complex! Northaven Terrace is a dead-end street for cars. But on your bicycle, just open the gate at the end and you’re there.

Here is a route biking (or scooting!) from the downtown Transit Center to RGH, primarily along Bike Boulevards. This is 3.3 miles, under 20 minutes! (TIP: Thomas Street, a great connection for cyclists wanting to avoid Joseph and Hudson Avenues, is one way between Upper Falls Boulevard and Clifford Avenue, so use the sidewalk for that brief section.)

Biking to RGH from the north above 104 is a little more challenging. Unless you can use the El Camino Trail to cross 104, as seen below, you’ll have to bike on Carter Street or Portland Avenue to approach the complex (Seneca Avenue is a less stressful alternative).

When you arrive on the campus, there are currently three places to lock your bike:

RGH will soon be placing more bike racks by the main entrance. Cyclists can look forward to this custom bike rack in the shape of a stethoscope!

As a bonus, we’re throwing in a bike shed map of Rochester Regional’s other primary campus, Unity Hospital on the west side. Though outside the 20-minute scope for most people, Unity is approachable via the Erie Canal Trail from Spencerport, Gates, and the 19th Ward. It’s also not far from the City’s Maplewood Historic District. To get to Unity from Maplewood, we recommend taking Ridgeway to Latona to Welland, which takes you straight to the Unity entrance. Stay tuned for developments on the Eastman Trail, which will parallel Ridgeway Avenue. As you can see below, there are plans to connect these west side trails and we’re excited for that connectivity!