Home News Transportation and Poverty (Part 3): The Long Bus Commute and the Value of Time 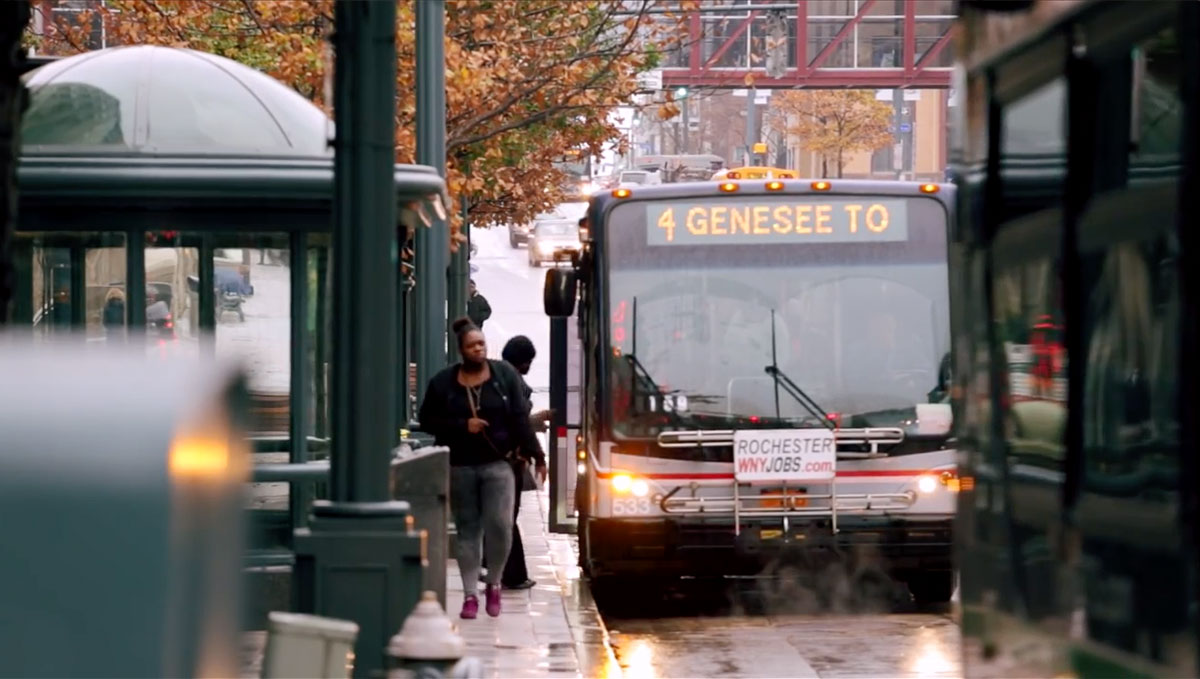 Here in Rochester, most middle class households own a car or two and think nothing of driving to their place of employment. For these individuals, public transportation needs to be a competitive alternative to driving for them to ditch their cars.  If a bus stops near a person’s home frequently and reliably, and drops that person off near their place of work within 10 minutes or so of what it would take them to drive, they may opt to commute by bus.

But what about those Rochesterians who cannot afford a car? Let’s look at some Rochester specific stats from the U.S. Census Bureau’s, 2011-2015 American Community Survey 5-Year Estimates:

Given this, we imagine that for a large share of these 7,500 workers, commuting by bus is not a choice; rather, it is the only economically feasible way to get to work – no matter how long the ride or how infrequent the service. 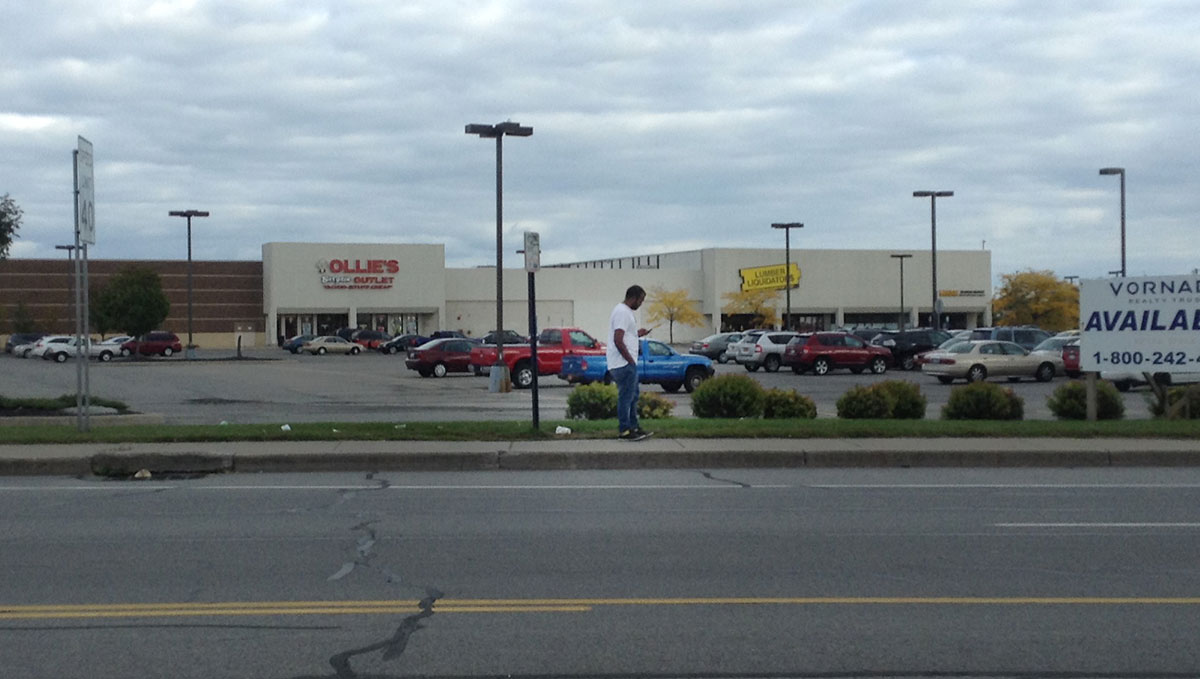 According to the Census Bureau, almost a third of city resident bus commuters spend more than an hour each way getting to work. Their jobs, largely in the retail, health care, and education sectors, are often located in suburban areas that require a transfer, adding cost and time to a commute. Our public transportation system, which needs sufficient density and ridership to be economically viable, struggles to fulfill its mission as jobs and homes disperse across the region.

Let’s put this in perspective, the average commute in our region is 20.4 minutes, a fact the Greater Rochester Enterprise uses to attract new businesses to the area. Check out this video about how great commuting in Rochester is (if you drive alone…).

And while Rochester’s peer cities in upstate New York have also been afflicted by the consequences of sprawl, US Census data reveals that a much smaller percentage of the residents of Albany, Buffalo, and Syracuse encounter public transportation commutes of more than an hour each day. 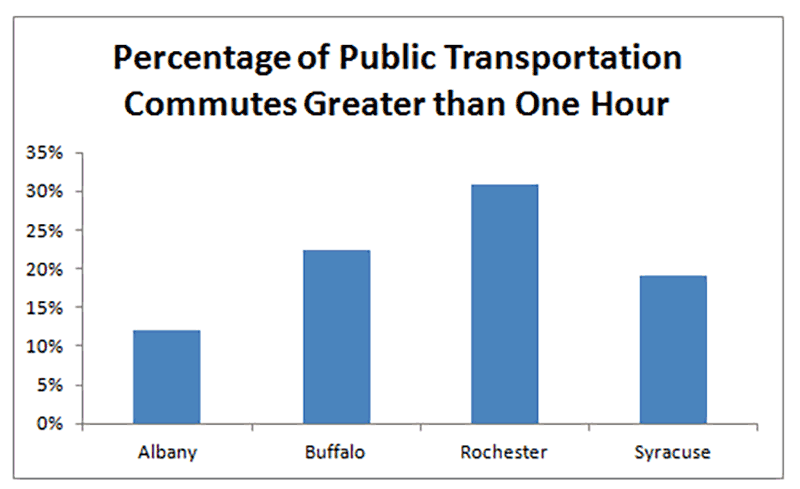 Let’s think about it a little more…

Imagine you are a city resident who resides in the Beechwood neighborhood just northeast of downtown. You work 9am – 5pm at a store in Marketplace Mall and make $10 an hour. To arrive punctually, you must board the route 33 at 7:34 am and then transfer to the route 24 at the transit center at 8 am. This bus gets you to Marketplace Mall at 8:34 am, almost a half hour early but the next closest option is arriving at 8:56 am and you know you’ll be late due to the walk. According to Google Maps, You’ve just spent over 1 ½ hours to travel around 12 miles (at a whopping speed of 8 mph – if you are fit you can bike there faster). Your way home is a bit easier. If you can leave right at 5 pm, you can board a 5:10 pm bus and arrive back home at 6 pm. Your evening commute is 50 minutes. Together you’ve spent 2 hours and 20 minutes in commute, or 3.5 times longer in commute than the average regional resident does.

Let’s imagine how this commute effectively reduces your hourly wage and compare that wage to a hypothetical job at the Sibley Building in downtown, where you’d experience closer to the regional average commute time via a bus commute. 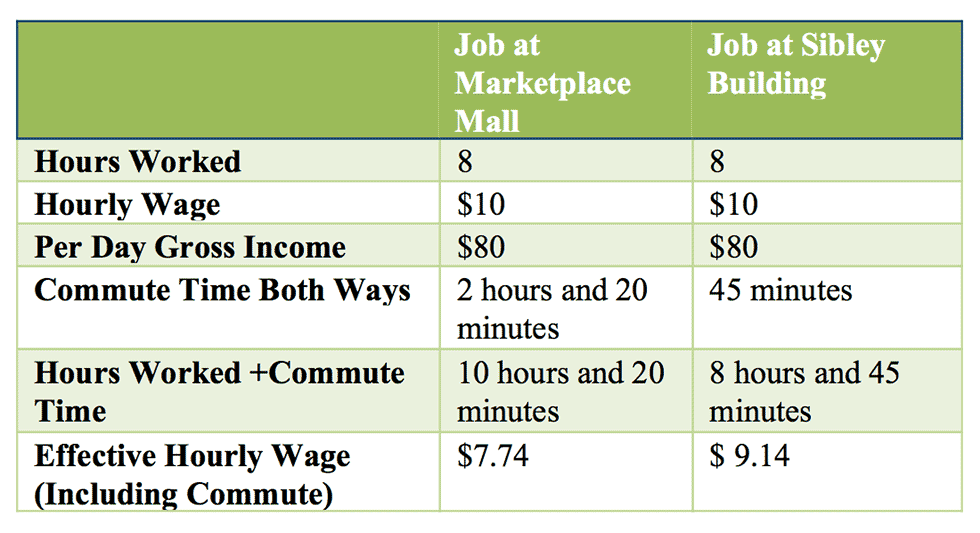 This long commute is not just a nuisance, it is a real barrier that prevents upward economic mobility.

This time spent commuting does not just reduce your effective earnings, it crowds out time available to do other things. You could be spending time with your kids, taking classes, or even picking up additional shifts at work. It seems reasonable to assume that more people would have jobs if it took less time to get to work.

Maybe it is not too surprising that long commutes are linked with a litany of other ills, including lower work retention, higher absenteeism, higher levels of stress, fewer hours of sleep each night, a number of serious health issues, and even higher divorce rates. Time magazine, Forbes, and Psychology Today have all written about the negative consequences of long commutes beyond the effective hourly wage reduction.