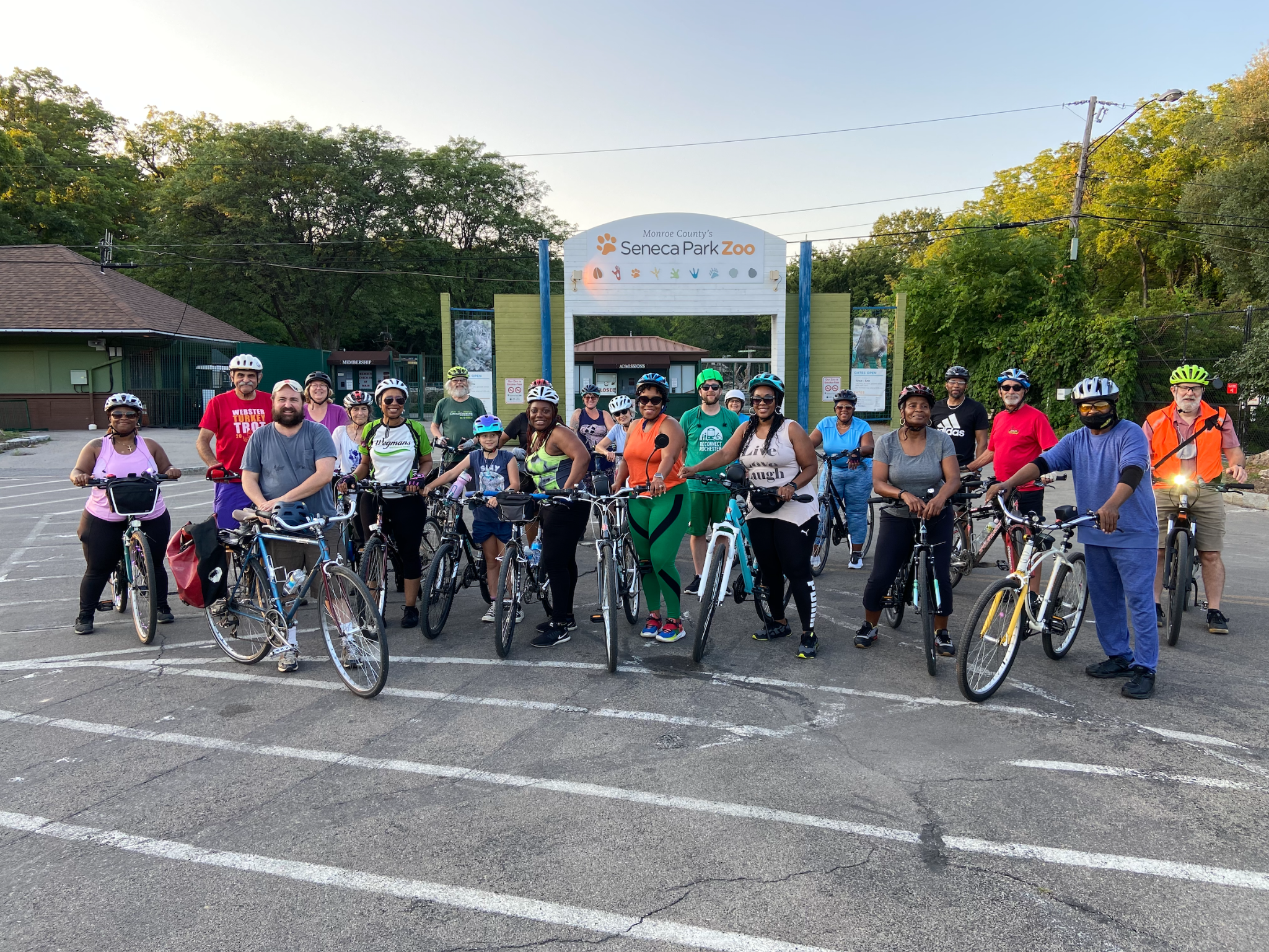 After taking a bike class in 2013 which made me much more comfortable biking around, in 2014 I adopted the bike as my primary mode of transportation. Since biking short distances was easy and fun, it wasn’t long before I wanted to ride with other people. In May 2015 I took our son and we went on our first group ride: a tour of public art as part of RoCo’s Ride It exhibit. Riding in such a large group was euphoric! I knew I wanted more.

That summer I started attending the weekly Unity Ride at Bulls Head Plaza, then in its first season. The people, the diversity of the crowd, and the Unity Ride’s message – cyclists coming together to stand for non-violence and community – kept me coming back each week. I also started attending the City’s Tuesday Guided Bike Tours sponsored by the Recreation Department. That’s how I got to know Richard DeSarra, who was leading those rides at the time. For decades, Richard was the godfather of all-things-cycling in Rochester. If there was anything happening related to bikes, he had his fingerprints all over it. Most notably, he cofounded the Rochester Cycling Alliance with Jon Schull and was instrumental in the creation of Rochester’s first Bicycle Master Plan.

Richard was a perfect bicycle tour guide. Not only was he a natural at herding a large group of cyclists across the city, but he just knew so much about local history, architecture and culture that anywhere we went, I’d learn something new. It was through those Rec Dept guided bike tours that I got to know Rochester by bike, particularly the Genesee Riverway Trail and other scenic locations.

Eventually Richard’s health started deteriorating and he wasn’t able to lead the tours anymore, though his advocacy and leadership continued until he passed away in 2019.

For several years, Oscar Wilson led the tours and did a great job growing the community. As with many things, the pandemic threw a wrench in those weekly tours and this year, the Recreation Department felt it was time for a reboot of sorts. The City reached out to Reconnect Rochester to see if we’d be interested in organizing and leading the weekly tours. We jumped at the unexpected opportunity and asked longtime collaborator Exercise Express and R Community Bikes to help.

We changed the night to Wednesdays and decided to use these fun community rides to familiarize residents with bike infrastructure, and to focus the tours on the newly expanded Bike Boulevard network.

For those unfamiliar with bike boulevards, they are a low-stress network of mostly residential side streets that parallel busy arterials. Traffic calming measures such as speed bumps are installed to slow down and even deter car traffic, so cyclists have a better experience. Over time, wayfinding signage will be added for cyclists. Until this year, Rochester barely had any Bike Boulevards. Many are probably familiar with the first in the area: the Harvard/Canterbury boulevard from Hillside Ave/Cobbs Hill to Monroe Ave.

In 2021, the City added 20 miles to the network! When you include the next phase of boulevards (the yellow routes above, which are absolutely cyclable now!), the future Running Track Bridge connection, and pre-existing trails, you end up with a bike network like this:

Thanks to Stefan Korfmacher for creating this stylized map for us to generate interest and discussion. Click here for a key.

Here is the best thing about the Bike Boulevards: They are Rochester’s first and up to this point only centrally planned bike network. Whereas bike infrastructure on arterials is too often done in piecemeal fashion “where feasible” with no overall view to connectivity, the Bike Boulevards are the first instance of Rochester zooming out and implementing a centrally coordinated plan to connect the city. As a result, from one end of a particular boulevard to the other, there are no gaps. Keep in mind these boulevards cross major, busy streets but for the most part avoid cycling along them.

It’s important to note that the City views these bike boulevards as complementary to, not substitutes for, on-street infrastructure on arterials. But the boulevards in large part can get you where you need to go within the city comfortably as long as you’re willing to go a little bit out of your way. Someday the network could expand to look like this.

Our hope over the summer was to build up bike traffic along this growing network ahead of time and amp up excitement for construction. We rode from a different Rec Center each week and each ride was about seven miles so it could be comparable in length to other community rides like the Unity Ride. Over the course of the series, we were able to show how these various routes connect with each other to form a usable network. Here are all of our different rides over the summer combined in one image.

Great emphasis was put on the City’s north side, where not much bike infrastructure is present and where many Rec Centers were kept open during the pandemic due to the vital support they provide to their surrounding communities. Participants enjoyed riding along the east-west boulevards in this area that serve as wonderful alternatives to Norton, Clifford, and Bay.

Though we weren’t able to ride every boulevard this summer, you can see how these low-stress routes really do connect the City! From our marker campaign, we knew residents wanted an easier way to bike to the Zoo and to the Public Market. Well, this bike network delivers! The El Camino Trail, which you can get to via bike boulevards, ends at the Seneca Park Zoo and the Public Market is approachable via bike boulevards from all four directions!

The best part of the series was having participants ride through neighborhoods they had never seen before. Maplewood and 14621 just west of RGH got a lot of love. To my surprise, participants’ favorite ride was the longest one with the most hills! To wrap up the series, we stopped by Exercise Express, which is situated on the Ames Street bike boulevard, for some treats. Along with some group photos, here is some of the neat stuff we spotted along our journeys: