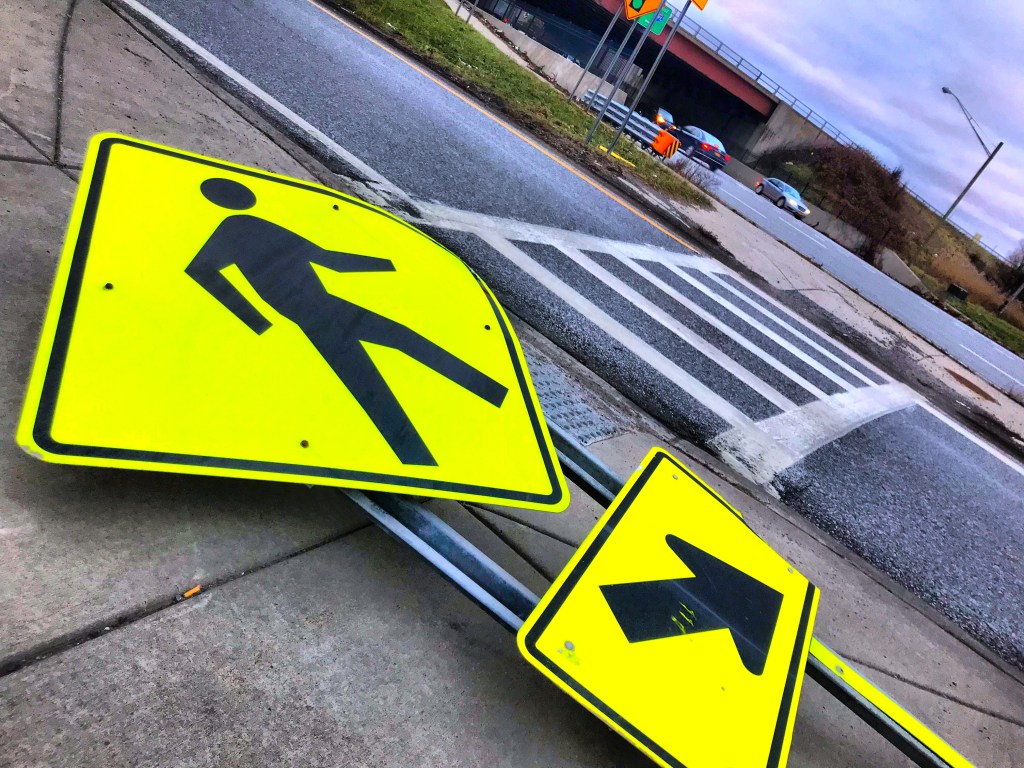 A few nights ago I was riding my Onewheel through the residential streets of Rochester’s South Wedge neighborhood. I slowed as I approached a lightly traveled 4-way stop sign controlled intersection, where a car stopped and yielded the right of way to me as I had reached the intersection first.

A few minutes later, I tried to cross Rochester’s South Ave. while carrying my device across a crosswalk. And while the signage clearly states that pedestrians in the crosswalk have the right of way, 8 cars blew through said crosswalk before a car finally stopped and allowed me to pass.

Tonight I was trying to cross another street near Rochester’s historic Mt. Hope Cemetery (final resting place of Frederick Douglass and Susan B. Anthony) at a RRFB-controlled crosswalk. I pressed the button which activated the flashing yellow lights indicating that a pedestrian is ready to enter the crosswalk, and subsequently watched in horror as 19 cars drove through the crosswalk without so much as a brake tap.

Here’s my question… why aren’t pedestrian crosswalks simply controlled with a traditional stop sign? For the life of me I’ve never been able to understand this. Let’s break it down…

If we think of stop signs as safety signals for everyone on our streets, then why is it that our most vulnerable population, people on foot, only receive “yield” status?

If we claim that a pedestrian always has the right of way in a crosswalk, why do we treat pedestrians as “yield” worthy instead of “STOP” worthy like we do cars? Why doesn’t every non-signal-controlled crosswalk simply have a universally recognizable stop sign instead of an innocuous yield sign or flashing yellow lights that most drivers simply dismiss?

We claim to prioritize pedestrians with bright signage and flashing lights but until we prioritize a person the way we prioritize a car, truck or SUV, the number of people killed by cars will continue to rise.

Arian took this to the next level when he conducted a filmed experiment with an RRFB crosswalk — take a watch below:

Did that peak your interest? Consider attending this week’s Rochester Street Films Event: Silent Epidemic on the growing number of pedestrian injuries and fatalities on our streets. We’ll be featuring this video along with several others + local data + live discussion with community leaders and crash victims.

(attend in-person at The Little Theatre or via livestream)