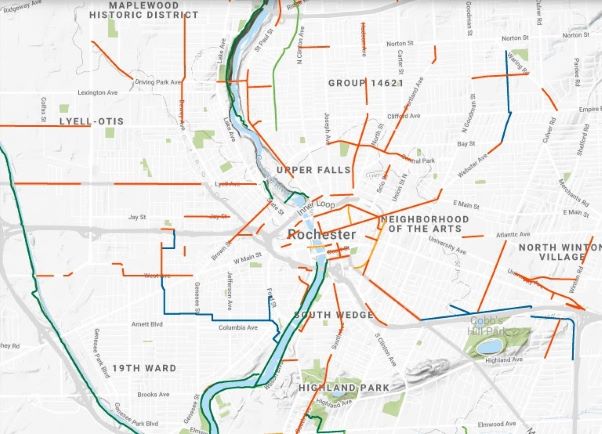 Let’s be honest: there are few cities out there that attract a whole lot of bike ridership without protected bike infrastructure. Whether it’s bollards or curbs or planters that are used, it’s understandable that cyclists want something between them and car traffic besides a thin stripe of paint. When protected bike infrastructure is implemented and it connects people to destinations in a low-stress manner, people use it! It is true that “If you build it, they will come”.

It’s also critically important to fill gaps in the bike network so it’s more usable for the average rider. As Brent Toderian notes, there’s a consensus emerging in the bike world that it’s more about quality of bike infrastructure than quantity (how many miles of bike lanes doesn’t matter as much as how safe & stress-free those miles are). The new regional bike map from the Genesee Transportation Council shows the gaps in our local bike network that lack real bike infrastructure (notice shared use lanes or “sharrows” are not counted as such) Where Rochester tends to score weakest in our regular assessments is in bike network analysis. Reconnect Rochester wants to see some continuous, non-interrupted bike routes as we approach 2034, the City’s bicentennial.

Another key to creating safe roads for riding is messaging to motorists that cyclists have a right to the road. Obviously, drivers harassing cyclists, telling them to “get off the street” doesn’t lead to a very bike-friendly city! We’d love to see every municipality use Bike Month and Bike Week in May not just to tokenly celebrate biking, but a time to get mayors and supervisors in front of cameras and tell motorists this important message: “Cyclists have every right to the street. We want more residents on bikes. More trips by bike helps us meet our goals. Pass them safely and courteously.”

So we’ve established that protected bike lanes are essential to a bike friendly city, and we’ll keep advocating loudly for them. But there’s no need to keep your bike in your garage gathering dust as you wait for Rochester to become the Copenhagen of North America. You don’t have to wait for some future version of Rochester to appear, and here are some reasons why:

Rochester isn’t a cruddy city to bike in. Many local riders concur and Dan Kamalic wrote a great blog last year observing how pleasant he finds Rochester to bike in compared to other cities he’s lived in. Rochester was rated a Bronze level Bicycle-Friendly Community in 2016 and 2020 (after making honorable mention in 2012), which means we’re a good/decent biking city already. Bronze is nothing to sneeze at; it’s a result of over a decade of intentional investment. We’ve made progress since the City made its first Bike Master Plan in 2011.

There’s absolutely room to improve (we’re not content to remain at Bronze) but cruddy cities to bike in don’t get ranked and recognized. Besides, there are parts of our report cards that Rochester scores very well in such as riding groups and bike events. We’ve got a great cycling community here! Plus we have some of the best trails in the country.

Painted, unprotected bike lanes are still very safe (even though they can be uncomfortable or obstructed at times). Most cyclists’ greatest fear, which is understandable, is getting hit from behind as they bike along the right side of the road. One would assume that with a city of bike lanes without physical separation from motor traffic, that cyclists getting hit in bike lanes would be a common crash scenario. Fortunately, such crashes are extremely rare, here and elsewhere.

Though some bike lanes could certainly be upgraded, protected bike lanes aren’t necessarily required everywhere. It’s a good bet that our city of the future, like many cities, will feature a mix of protected bike lanes, cycletracks, unprotected bike lanes, bike boulevards and trails working together to form a network. Some highly respected figures in the bike planning world only insist on hard separation from motorized vehicles when speeds hit 30mph. Therefore reducing speed limits and keeping drivers accountable to that speed limit is a great, proven way to make cyclists safer and grow ridership.

In 2021, the City greatly expanded its Bike Boulevard network. There is now a usable low-stress bike network in Rochester that enables you to get around much of the City without the need to bike on busy arterials. The Bike Boulevards primarily stick to residential side streets that have been traffic calmed and connect to existing trails.

Protected bike lanes are awesome but they aren’t a substitute for some basic traffic negotiating skills on your bike. No quality level or amount of bike infrastructure will ever alleviate the need to follow the law, maintain traffic awareness, and abide by some best practices when riding. Even if protected bike lanes proliferate, there will never be protected bike lanes or trails all the way to your destination. You will have to mix it up with traffic some of the time.

That’s where our bike education classes come in. Cycling doesn’t have to feel like swimming with sharks! In our fun classes, you can get the knowledge and confidence to enjoy cycling more. And a big part of being less stressed as you ride is learning to ride in such a way that limits motorists’ most dangerous choices. You can take drivers’ most dangerous cards off the table much of the time. It took taking a class for me to get comfortable biking and I suspect that’s probably true for most people.

You don’t need an encyclopedia’s worth of knowledge to bike; just a handful of tips that really change road dynamics and interactions. I don’t believe a day will ever come when cyclist education isn’t necessary because the bike infrastructure is so awesome. The most bike-friendly cities and countries in the world do a great job of educating cyclists and it starts when they’re very young.

Another reason you should not wait for a city filled with bike lanes: Protected bike lanes and cycletracks aren’t necessarily cure-alls since they can still leave you vulnerable at intersections (where most crashes occur) and at driveways/parking lots. Again, this means that some traffic negotiating skills and awareness are still/always needed. We’ll explore at another time that there are ways to construct intersections much safer for cyclists, and we hope Rochester will pursue these kinds of bold design solutions in the future.

So when it comes to bringing about a better biking city, which is ultimately what my job is about, I’m a both/and guy. I’m both pro-protected bike infrastructure and pro-education. It takes both to move the needle and create a bike-friendly city. So get your bike out this spring, and I hope to see you at a great community ride or event. If you want to take one of our classes in 2022 to get more comfortable, reach out and let me know. We encourage you as the City of Rochester and Monroe County create their first Active Transportation Plans this year, to be engaged in the public input process and advocate for better bike infrastructure.