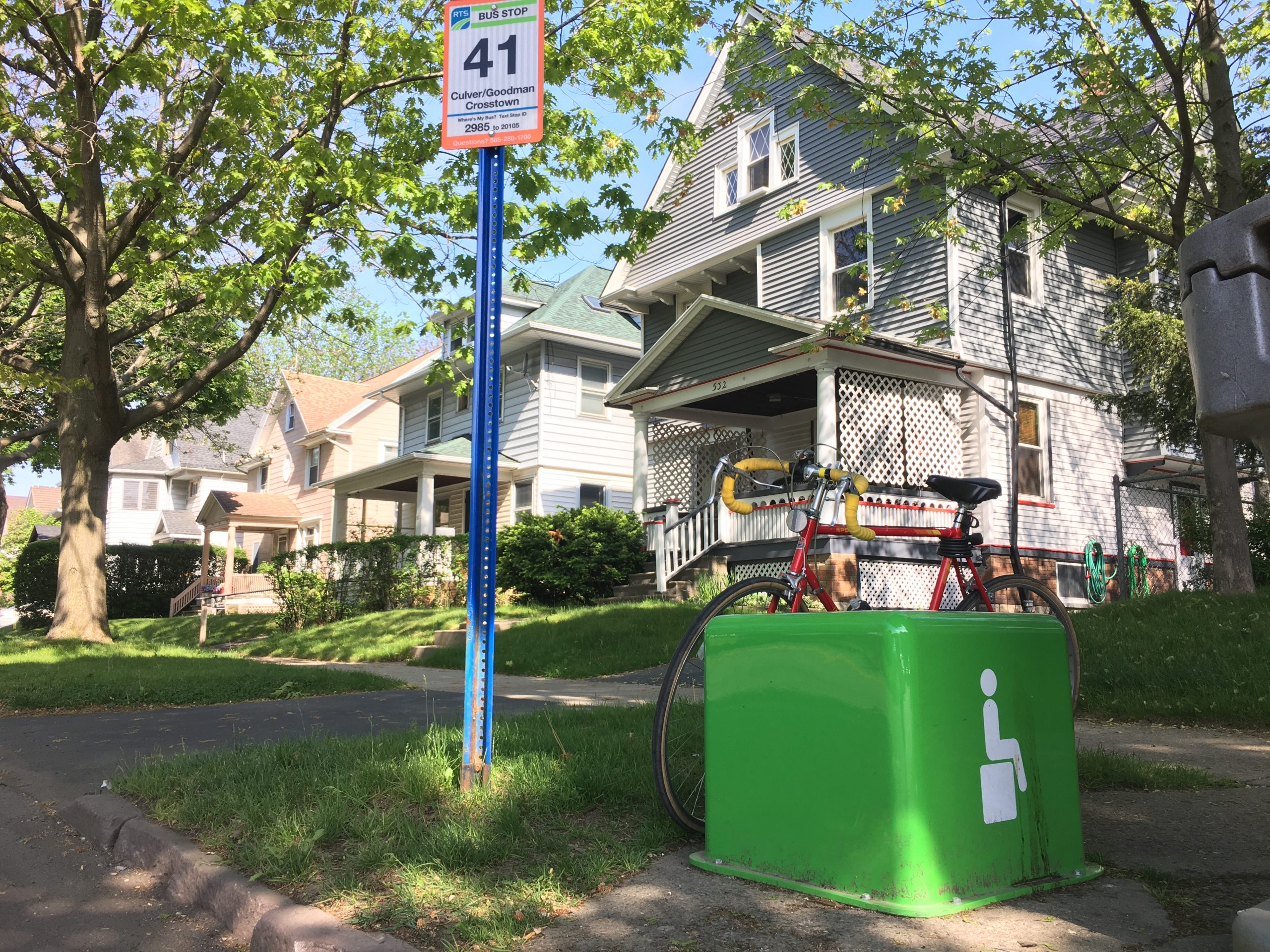 On May 17, 2021, a re-imagined Regional Transit Service kicked off in Rochester. As a hired Transit Ambassador for the first week of the rollout, I had a firsthand view of how the new bus routes and infrastructure were set up and how they functioned, and also got to hear the thoughts and experiences from transit users. In this post, I’ll recount my time visiting three of the new Mobility Hubs around the metro area, as well as my car-free week in Rochester! I am currently living in Massachusetts, so I was excited to have an excuse to visit my old college town, and get paid for it!

For those who may be unfamiliar, the Reimagine RTS initiative began several years ago, with the ultimate result of more efficient bus routes, including three new Crosstown lines (which I made extensive use of during the week), and an all-new On Demand service. The On Demand service is like micro-mass-transit, with shared vans that can be called for pickups and drop-offs anywhere inside specific On Demand zones. There are no fixed routes or bus stops in the On Demand zones.

The existing fixed-route bus service is named RTS Connect. The RTS Connect fixed-route services that run to On Demand zones now terminate at Mobility Hubs. These are more formalized bus connection points that are all served by an On Demand zone, as well. Here’s the map to help you visualize the new system.

My journey started at the Albany-Rensselaer train station, where I finally got to try the roll-on bicycle storage service. I packed a week’s worth of supplies into my camping backpack, and climbed on board the train. Once I arrived in Rochester, it felt great to throw my backpack on, hop on my own bike, and get myself over to my host’s house for the week. No waiting for an Uber or walking to the Transit Center. I was very grateful to also make it to the Flower Pedal Populaire Sunday bike ride to kick off my week. It was great to catch up with so many people, and see how the city has grown over the past few years!

My RTS Transit Ambassador schedule for the week was one for the early birds: 5:00am-1:00pm for Monday and Tuesday, then 6:00am-9:00am the remainder of the week. Reporting for 5:00am at the Hylan Drive Mobility Hub meant that I needed to plan my alarm time for the 45-minute bike ride to Henrietta with a little buffer time, and time to get out of bed and get ready for the day. 3:30am it was. My bike rides took me mostly on a straight line along Winton Road, which was eerily quiet at 4:00 in the morning.

The standard Ambassador uniform for the week was a blue RTS-branded apron, black RTS-branded mask, and a lime green RTS-branded visor. Hopefully it was clear that I wasn’t someone just loitering all day at the bus stop. Each Ambassador also received a small swag-bag with sunscreen (thank you!!), sanitizer, and information about the new bus lines and On Demand zones.

Monday morning started quiet, dark, and empty at the Henrietta Transit Hub on Hylan Drive, where I was assigned. The Hub consists of two metal and plexiglass shelters facing each other across the street at the Wegmans driveway entrance. The shelters are enclosed on three sides, with the side that faces the street open except for a center plexiglass slat.

For being on a suburban arterial, it was incredibly quiet and peaceful watching the sunrise and listening to the hundreds of seagulls and geese making their morning rounds. As the way went on, though, the traffic and noise levels became dangerously high at times as cargo trucks zoomed by at 40 miles per hour no more than twenty feet away from my seat. I would honestly suggest flipping the shelters around and having the opening face away from the street. Keeping the noise and fumes out would create a much better ride experience.

The first customer of the morning was a recent graduate from RIT, and an even bigger fan of transit than I was. He informed me as he walked up to the bus shelter at 5:50am that he wanted to be the first customer to try the new On Demand service. The On Demand hours begin at 6:00am, and at that hour two RTS-branded passenger vans drove up and staged at the far edge of the Wegmans parking lot. The customer boarded and went off to continue riding the new bus system for the day.

I was also happy to be joined by fellow Ambassadors across the street, and an RTS supervisor who was on duty for the day at the Hub to make sure things ran smoothly. As the morning progressed, I was extremely grateful that he was there and had direct access to dispatch communications, as I’ll explain.

Many of us are used to having first-day jitters, bugs, and hitches with new programs and initiatives, and Reimagine was no exception. Being a completely new service, On Demand had a quiet start on Monday morning. Those who did try out the passenger vans sometimes found themselves waiting at the Hub long beyond their scheduled pickup time, but with no clear reason why. When someone called customer service, the representative found that they were indeed scheduled to be picked up at the Hylan Connection Hub at their specified time. But the On Demand vehicle was nowhere to be seen.

Luckily, RTS’s supervisor who was assisting us that day was able to speak directly with dispatch and the operators. It turned out that the location of the Connection Hub was incorrectly placed on the vans’ GPS units as being at the terminus of the bus routes (at Walmart on Clay Road), and not at the Hylan Drive shelters. So, operators were driving to Walmart when instructed to pick up a passenger at the Hylan Connection Hub. This was ironed out as the week went on.

Another change that was unexpected by some passengers was RTS Connect bypassing the Marketplace Mall entrance, which was where the fixed-route buses previously would pass through. The new routes were laid out to run directly down West Henrietta Road to Hylan Drive, without diverting into the mall property. While this was more efficient from a bus scheduling standpoint, the change proved to be less efficient for many passengers who were taking the bus to the mall. They now had to walk from the Hylan Drive Hub, and then halfway around the outside of the mall, to get inside. This feedback was passed along to operators who then updated the route by Tuesday morning to once again pass through the mall entrance.

I offered my flexibility to the Ambassador supervisors during the week, and they took me up on the offer. Besides Henrietta, I helped to staff the Connection Hubs at Dewey Ave & Ridge Road, and Irondequoit Plaza. Each offered their own unique logistics that show just how diverse the neighborhoods around Rochester are.

On Wednesday and Thursday morning, Dewey Ave proved to be an important Connection Hub for commuters who work at the industrial centers on the west side of the city. This hub really served as a stress-test for the On Demand service, which had an On Demand zone comprised of all of the industry on the west side between Ridge Road and Lyell Ave. The flexibility of the On Demand service meant that pick up and drop-off times were not guaranteed, and it became apparent early in the week (before I was at that hub) that passengers would need to book additional “buffer” time for pick-ups and drop-offs to be on time for work. It was an evolving situation as the week went on.

Another piece of the puzzle involved the “long” and “short” fixed-route lines that served the Dewey Connection Hub. The long and short lines are basically overlapping bus lines, with one line running all the way to the far end of Dewey Ave at Northgate Plaza, and another stopping short at the Dewey Ave Connection Hub at Ridge Road.

Irondequoit Plaza was the quietest hub of the week in my opinion, mostly since I was stationed there on a Saturday morning. There were not any commuters to speak of in this bedroom neighborhood, and a smattering of early-morning Wegmans shoppers did alight from the fixed-route buses that terminated here. It was a good opportunity to chat with some of the bus operators as they laid over at the hub.

Finally, I ended my week on Sunday morning back where I began, at the Hylan Drive Connection Hub in Henrietta.

As I reflected on the week during the sunny and quiet Sunday morning, I was grateful to be on the ground to see how this system worked in the real world. As someone from a city so small that our buses only run once an hour, it was so much fun to get fully immersed in a city-wide bus system serving thousands of passengers a day. I’m looking forward to my next return visit, when I can be a full-time passenger on the RTS buses, and remember how vital our public transit is for a healthy and strong city.

The map above shows Rochester’s public transit network. Looks impressive with all of its lines stretching out across Monroe County. From Webster to Chili; Greece to Penfield; there’s a bus or two to get you there. On the other hand, if our transit network were really as good as it looks on this map, why are less than 2% of all trips in Rochester made using public transit?

Hmmm… Maybe because parking is cheaper than air here in Rochester?

Well, yes. But also, this map might be overstating the effective reach of RTS. Remember, a transit system is only good if it’s there when you need it…