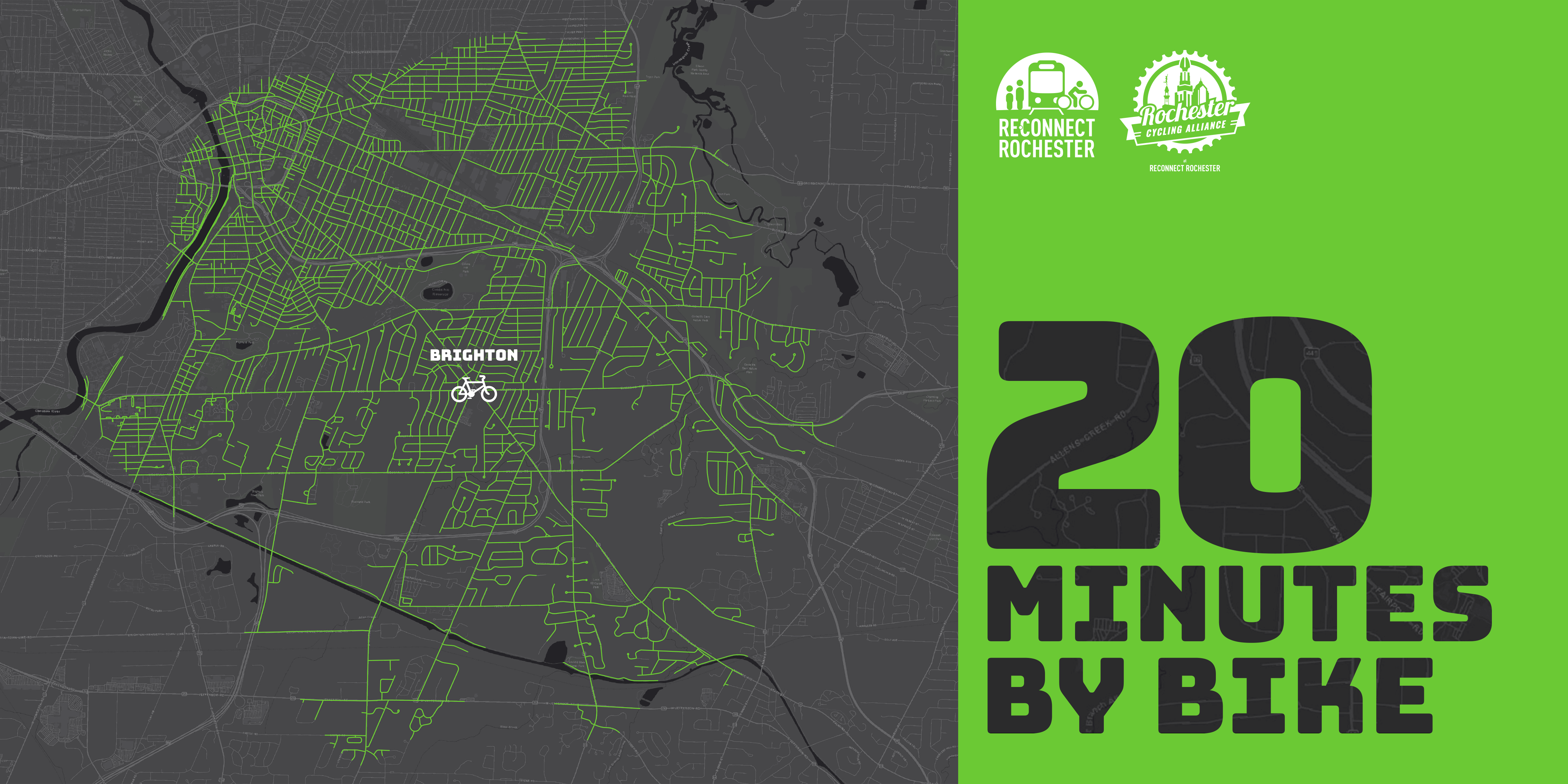 Presenting the fourth in a series of custom “bike shed maps.” For this next installment, we chose Twelve Corners in Brighton and are showing how far out in every direction you can get on a bike at a casual but steady pace of 10 miles per hour. This means that if you live anywhere in this green area, you can get to Twelve Corners within 20ish minutes on a bike. Thanks again to Brendan Ryan and Mike Governale for their help putting these maps together for us.

To get us familiar with this green territory in Brighton, here’s WomanTours’ Jackie Marchand sharing her personal travel-by-bike experiences.

One of the many things I love most about living in Brighton is its bikeability. It seems I can ride my bike to nearly everywhere I need or want to go. You’d think with more than 50 years of living here that I’d be able to find my way around without Google’s help. However, it’s become a game. Do I know my community better than my phone does? Can I find a safer, quieter and prettier way to bike to my destination than Google can? Or will it surprise me and show me a hidden bike trail?

Yesterday, I had a breakfast meeting at Morgan’s Cereal Bar on East Avenue. I used the bike feature on the Google Maps app and it sent me down Monroe Avenue. That wasn’t bad because it has a bike lane. Then I was supposed to turn down Alexander, but I knew there was a beautiful new bike path on Union Street. I went one block further than Google recommended and reveled in cycling the former Inner Loop on my way to East Ave.

I left my house ten minutes earlier than if I’d driven, and managed to complete a 20-minute bike ride before breakfast. The best part of all was that while others had to pay the meter, my parking was free!

When I grocery shopped at Tops last week, my phone sent me straight down Elmwood Avenue for one mile to the store. I always avoid cycling down Elmwood Avenue, as the lanes are too narrow for both a car and a bike. Fortunately, that could change in the future. There are plans to extend the Elmwood Avenue cycletrack from South Avenue to 12 Corners, which will be fantastic but is still years away.

For now, I have to find my own safer way. I know there’s a small trail behind Temple B’rith Kodesh to quiet Ashley Drive. At the end of Ashley, another trail connects to Brandywine and then another short trail connects to Lac De Ville into the Tops parking lot. I arrived at Tops in 15 minutes by cycling only one block on Elmwood Avenue. Google – 0, Jackie – 2.

Last weekend, I wanted bagels from Bagel Land at 12 Corners, the cornerstone of Brighton. In addition to the fastest route straight down Elmwood Avenue, Google offered me the longer but better route through side streets to the back of the plaza. There was even a bike rack waiting for me. It took one minute longer but was well worth it. Thanks Google.

It’s actually pretty easy to navigate around 12 Corners using the small side streets to avoid the tight busy intersections. If traffic is low though, I’ll choose to cycle through it rather than around it. All the stoplights keep vehicles moving slowly.

Now that the Auburn Trail is improved, my favorite after-office ride is to the Pittsford Wegmans on my way home. Google actually found this route for me. My office is just over the Brighton/Henrietta line and an easy half-mile to the Canal Trail. After a mile on the trail, I linked to the unpaved Railroad Loop Trail that took me behind Pittsford Plaza all the way to Wegmans. Google even told me how long it would take – just 18 minutes. Google – 2, Jackie – 2.

After shopping, I crossed Monroe Avenue to hop on the Auburn Trail. Google didn’t know about this trail yet – it’s that new. I exited the trail at Elmwood Avenue and then meandered some calm streets through quiet neighborhoods to my house. It felt safe and relaxing. When was the last time you called a trip to Wegmans relaxing?!

In search of some comfortable biking clothes last week, I googled the bike route to Sierra Trading Post from my office. Most of the 16-minute trip to the store was on roads, but there were shoulders and the traffic was light, so I felt safe. Google even knew to take me around the back of the stores where the loading docks were to avoid the busy parking lot. Surprise – there was a bike rack waiting for me in front of the store! Google – 3, Jackie – 3.

Examining the ride home after shopping, I learned that my phone wanted me to take the Canal Trail to the Brighton Town Park, but from there Google failed me. It was sending me on Westfall to South Clinton to Elmwood Avenue for a total of two miles on busy thoroughfares.

When I zoomed in, I saw that there was a small path connecting Westfall to Schilling Lane in a small residential neighborhood. It allowed me to cut out the hilly intersection at Westfall and S. Clinton and cycle nearly the entire two miles on a mix of quiet roads and paths. Admittedly, I probably wouldn’t have found the trail without Google, so I gave us each a point. Google – 4, Jackie – 4.

Finally, I already knew that the two newest trails in Brighton are not recognized by Google as bicycling routes. The one-mile long Brickyard Trail recently celebrated its fifth anniversary and connects Westfall and Elmwood Avenues. It’s a stroll through wetlands where I’ve regularly spotted foxes, turtles, owls and turkeys. The Highland Crossing Trail is less than two years old and also connects Westfall and Elmwood Avenues, but then continues north through Highland Park, ending at the Genesee Riverway Trail. Its highlight is an elevated boardwalk through a forest.

The two trails are my favorite place to go when I don’t have anywhere I need to be. I tried the loop the other day, incorporating a couple calm bike boulevards that Google suggested. So I gave Google two points for the bike boulevards, and myself a point for each trail. Google – 5, Me – 5. I’m going to have to keep cycling so I can get ahead! 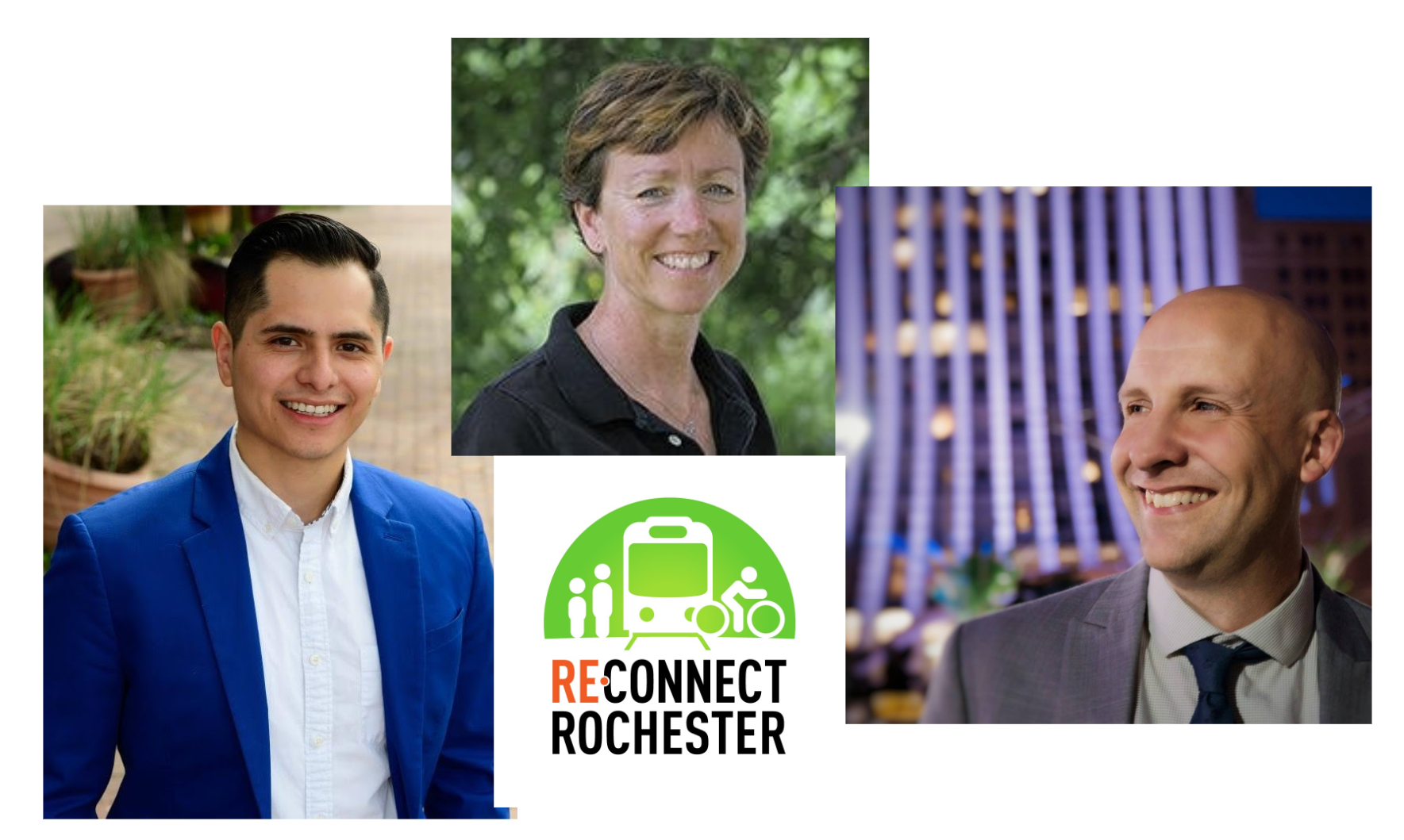 We kicked off the new year and decade with our Annual Meeting the first week of January, where we welcomed three new board members — Victor Sanchez, Jackie Marchand and Arian Horbovetz.

Victor is a long-time volunteer for Reconnect Rochester, doing a lot of heavy lifting for our major events through the years. Jackie assisted our Reconnect Rochester/Rochester Cycling Alliance transition team with the Cycling Coordinator candidate search & interview process, and has volunteered on our membership committee. Arian has worked with our communications team to provide content for our blog, as well as provided invaluable background research on e-scooters that shaped our recommendations to the City of Rochester about smart, safe implementation.

Welcome, Jackie, Victor and Arian! Thank you for volunteering your time and talent to hop aboard our train.

Arian Horbovetz was born in Chicago Illinois, but has spent most of his life in the Greater Rochester Area. Aside from working in clinical trials for the University of Rochester, Arian has owned and operated a professional photography company, ArianDavidPhotography for over a decade.  Five years ago, Arian’s love of urban living and passion for the revitalization of our Upstate New York cities led to the creation of his online urbanist publication, The Urban Phoenix.  Spurring conversation about our cities today, the history behind why our cities are the way they are, the importance of public transit, walkability, and cycling infrastructure are just a few of the topics raised in the nationally-enjoyed blog and podcast. Nearly 40 of The Urban Phoenix’s posts have been republished by Strong Towns, a national leader in the New Urban conversation. Calling himself an “Urban Influencer,” Arian takes pride in challenging the long-held misconceptions about cities, how we live, and why our urban cores face the hurdles they do in a changing world.

Jackie Marchand received an undergraduate degree from the University of Albany and an MBA from the UR Simon School. After working in nonprofit development and then a decade of making bikes and biking apparel for women at Terry Bicycles, she knew she wanted to help make cycling more accessible to more women and purchased WomanTours in 2004. Since then, she has quadrupled the size of the company. In all, Jackie has worked in the Rochester bicycle community for 25 years. When not biking to the office, she’s on the road planning and designing new tours to share her love for cycling with more and more women every year. Jackie travels quite extensively, in fact, having visited all seven continents and at least 45 countries. She’s witnessed how multimodal transportation can transform cities around the world, bring people together, and create more vibrant communities. Jackie wants to help bring the successes from other places to our very own region.

Victor Sanchez is a Virtual Design and Construction Administrator for Wegmans Food Markets. Victor was born in Mexico and later moved to White Plains, New York. He graduated from RIT with a bachelor’s degree in Civil Engineering Technology. Victor is the immediate past Chair of RocCity Coalition, an organization focused on young Rochesterians. He has represented the Coalition in the Regional Economic Council, Roc-The-Riverway Management Entity Committee, and Re-imagine RTS Advisory Committee. Victor volunteers on several committees with the Out Alliance, Human Rights Campaign, and Genesee Land Trust. Victor also serves on the Boards at Trillium Health, New Pride Agenda, and Rochester People’s Climate Coalition.