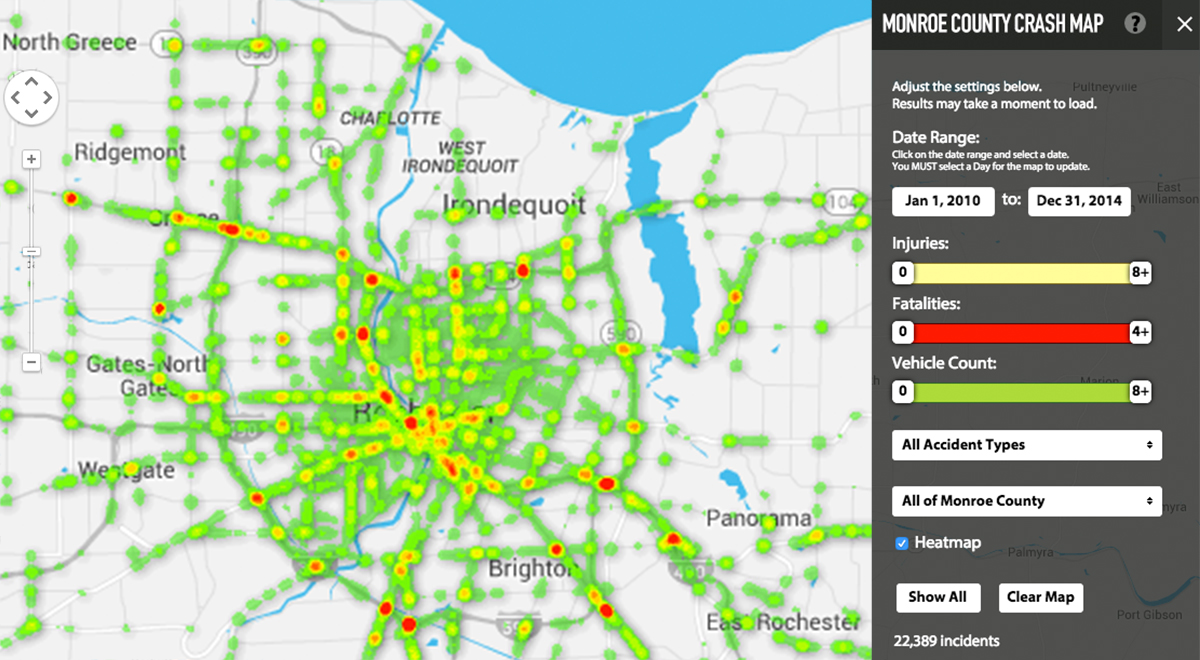 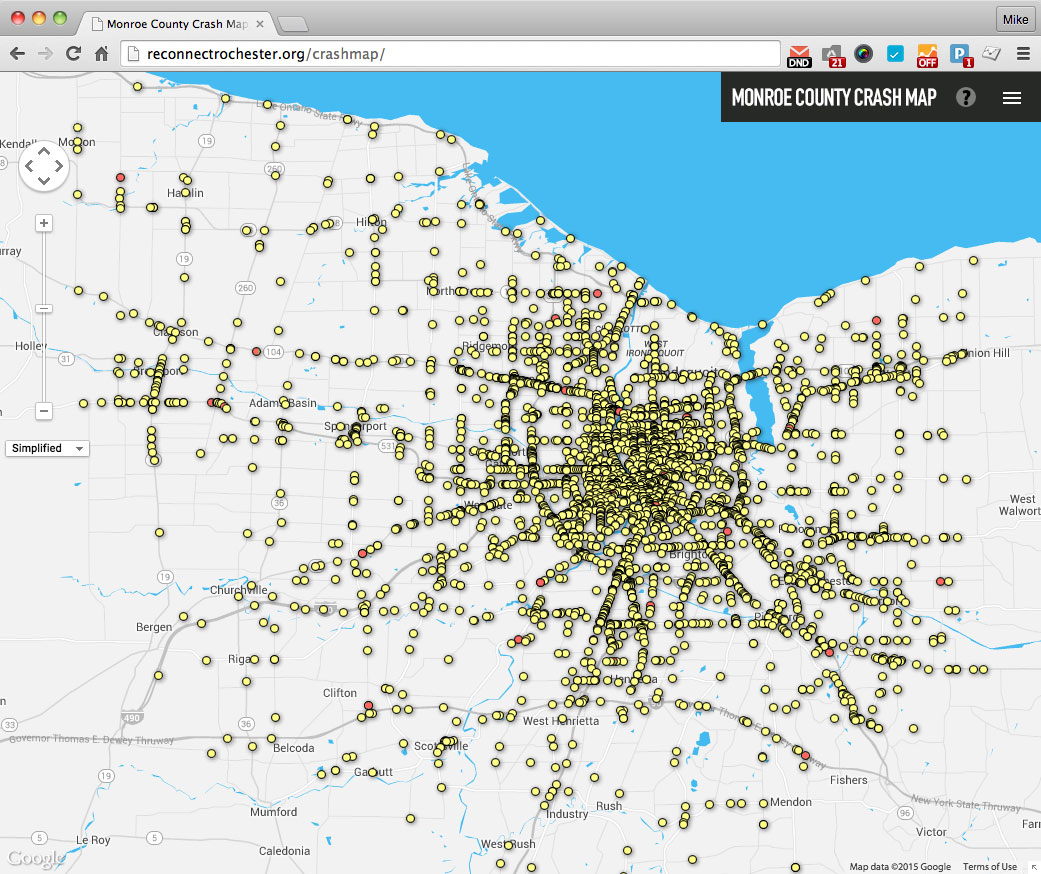 allows the general public to plot crash data on a Google map. You can also filter the results using a variety of category settings including the type of crash, date range, vehicle count, and the town in which the incident took place.

Previous maps and reports on this topic typically included only traffic fatalities and ignored injuries. This is like trying to view Lake Ontario through a pinhole.

In 2014, for example, Monroe County saw 27 fatal crashes. By including the 4,077 incidents that resulted in people being hurt, this new tool gives a more complete picture of just how dangerous our roadways can be. 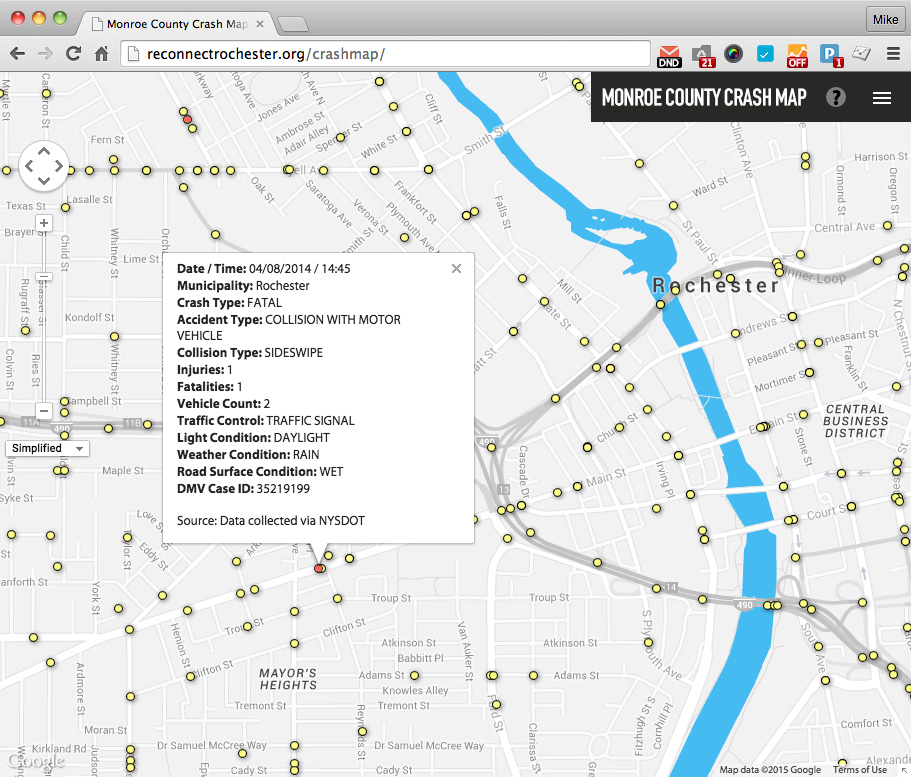 Our streets and highways are intended to carry people safely to their destination. Life-altering car crashes are occurring every day in our area. This is an epidemic that looms larger in Rochester than violent crime, yet we allow careless driving habits and poorly designed roads to go largely ignored.

Even a non-life-threatening injury can have lasting impacts on individuals and families. According to Centers for Disease Control and Prevention

the cost of medical care and productivity losses associated with injuries from motor vehicle crashes in the U.S. exceeded $80 billion in 2010 or nearly $500, for each licensed driver in the United States.

The intent of this map is not to frighten people. By taking this data which is rarely ever released to the public, and presenting it in a way that is both visual and highly interactive, we hope you will engage with it and use it to do something productive with. 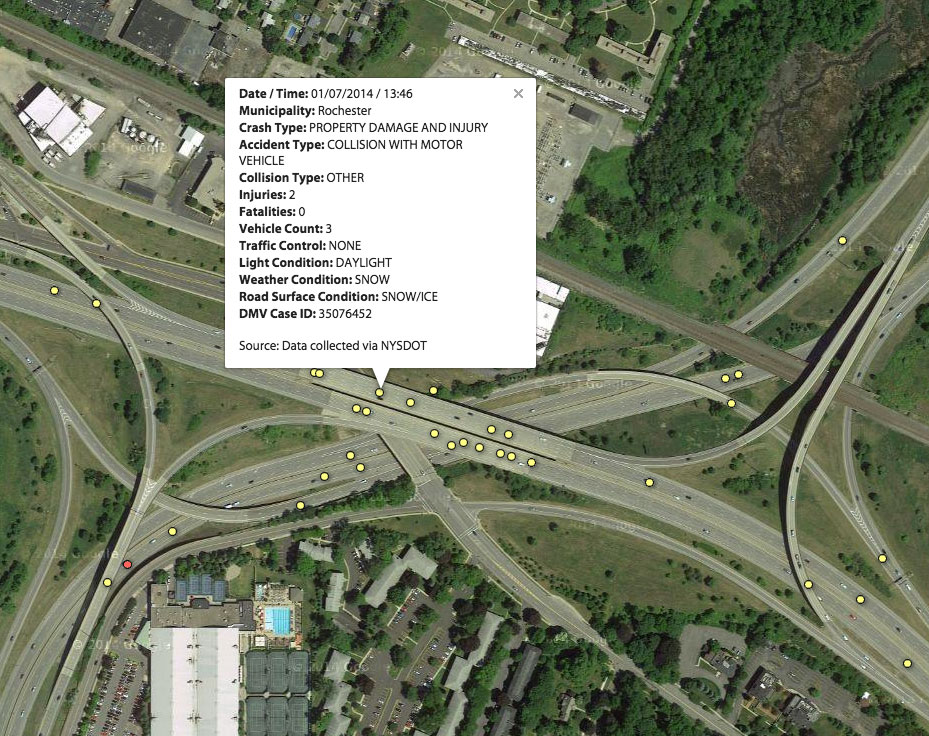 Development of the map was donated by Livadas Consulting

, a Rochester, NY-based digital agency. Founder, Nicholas Livadas said, “We live in a time of unprecedented connectivity, capturing data faster than we can draw meaning from it. It’s important that we take time to reflect on the big picture. Our behavior is often influenced by visualized data and our wellness correlates to our access to, and understanding of unbiased information.”

The Crash Map data can be sliced up and viewed in an infinite number of ways. For example, you can find all the incidents that took place in your town, or on your own street. Or see how many incidents involved pedestrians or cyclists.

annually as new data becomes available. We hope you’ll take some time to work with it, and let us know what you think.