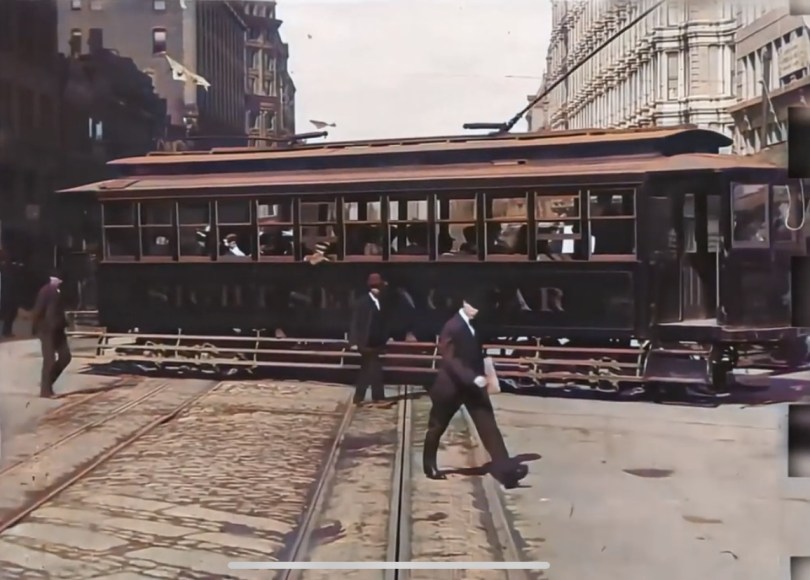 “Dude, get out of the road,” you yell in an enraged state fueled by someone’s blatant disregard for the fact that you woke up late and are traveling 10mph over the speed limit only to encounter a man “jaywalking” across the road in front of you. Your displaced anger bubbles over as you find yourself inconvenienced for a whole 9 seconds.

We’ve all been there… getting behind a car that’s traveling 10mph under the speed limit, trying to pass a cyclist with no shoulder, or yelling at a pedestrian who crosses the road outside of a crosswalk with no regard for your time.

Let’s step back in time to 1906. Jaywalking, or the illegal crossing of a street in a non-designated crosswalk, was 20 years from being a thing. The automobile was just beginning to assert itself as a semi-regular addition to city streets that accommodated a multi-modal construct. Can’t imagine what this looks like? Let’s look at this amazing digitally remastered video of a 1906 San Francisco street car ride.

The most important thing to note in this video is how diverse the street traffic is. Horse and buggy, trolley, automobile, bicycle, pedestrian… they all move at approximately the same speed. The well-to-do owner of the car travels at a speed that is similar to the pedestrian and cyclist. While the driver may be able to enjoy an independent, stress-free commute, he or she is subject to the street congestion caused by many different forms of mobility. And while this low-speed chaos would likely be psychologically catastrophic to the car commuter today, it presents some incredibly meaningful lessons with regard to our streets and their effect on society.

Trolleys, carriages, bikes, cars and pedestrians… count the number of different forms of mobility in this video. The streets were truly for everyone, regardless of speed, size or socioeconomic status.

Equitable transportation is rooted in the idea that anyone can access jobs and resources equally, regardless of their socioeconomic status. In this piece of video, pedestrians, mass transit and cars move at a similar speed. The difference in velocity between the most exclusive form of transportation and the most humble form of transportation is negligible. Today, the average 15 minute commute by car is likely to be over an hour by bus. The prioritization of the automobile has completely eradicated equitable access to jobs and resources.

In the video above, the fastest form of transportation, the cars, are moving about 2-3 times the speed of pedestrians. Sure, that difference might be a great deal more on an open road, but the top speed of between 30 and 50 miles per hour for the average Ford… not to mention you needed oil every 250 miles, and the fact that highways were just a glimmer in the hopeful eye of an urban enemy. A humorous note, just two years earlier, a driver was given the first speeding ticket in Dayton Ohio for going 12mph in a 5mph zone.

At such low speeds, the prospect of “sprawl” was horribly impractical. As a result, cities remained unquestionable centers of equity, efficiency and productivity. Because cars were just a slightly faster mode of transportation in a sea of other mobility options, 15-20 mile car commutes were simply not possible.

But cars became faster. Car and oil companies became the dominant lobbyists in the United States. Highways were built to allow for greater sprawl, all subsidizing people’s desire to create exclusive communities outside their city centers.

I shared this video with a number of friends. The comments back marveled at the clothing, the trolleys, the horses, the man sweeping horse droppings, and the maddening chaos of multi-modal traffic. But when I look at videos like this, I see what cities were like when mobility was far more equitable. Sure, our cities were dirty, crowded, smelly and sometimes scary. Sanitary amenities, cleaner energy and a host of other legal and environmental issues were still hurdles for cities 1906.

But the power of the city as the social, economic and equitable hub of humanity was far greater than it is in the U.S. today. Architecture hasn’t changed all that much, save the skyscraper. Street layout is pretty much the same. The big difference is the fact that the formally diverse streets featuring slow traffic have been replaced with exclusive automobile access, allowing those who own cars to speed to their destinations while those who must rely on public transit are subject to maddeningly underfunded networks, long wait times and inefficient commutes.

The video above shows what streets were meant to be. They were havens for diverse mobility instead of space that is solely dedicated to speed and exclusivity. Our cities have paid the price for this massive mistake, and as a result, equity and upward mobility continue to lag compared to much of the rest of the industrialized world. 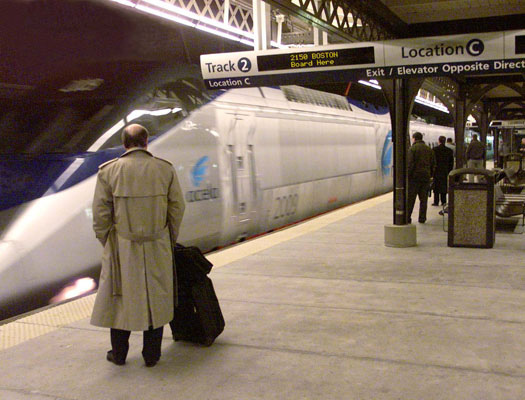 In terms of rank, Buffalo is 50th, Rochester is 51st, and Syracuse is 81st. As a combined area, we would become 19th largest, edging out Tampa, St. Petersburg, Clearwater, FL and just behind St. Louis. Nice, eh?

END_OF_DOCUMENT_TOKEN_TO_BE_REPLACED 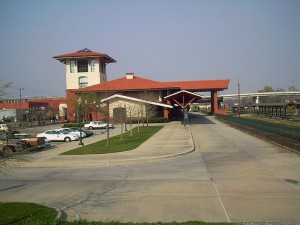 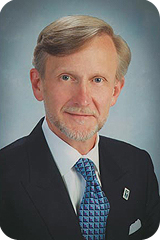 Rochester’s dazzling urbanites, development gurus, transit afficionados, preservation honchos, political luminaries, and architectural stewards are all very pleased that the Rochester Regional Community Design Center’s final lecture of the 2009-2010 season brings John Robert Smith to the Memorial Art Gallery on May 10th at 7PM.  This enthuasism will surely spread like wildfire once the community at large understands what a tremendous impact this man has had in the realms of community revitalization and improving housing and mobility choices for citizens in communities with situations similar to Rochester.

The future of this or any community hinges on the following concepts, all of which are likely to be discussed at the speech and reception:
END_OF_DOCUMENT_TOKEN_TO_BE_REPLACED 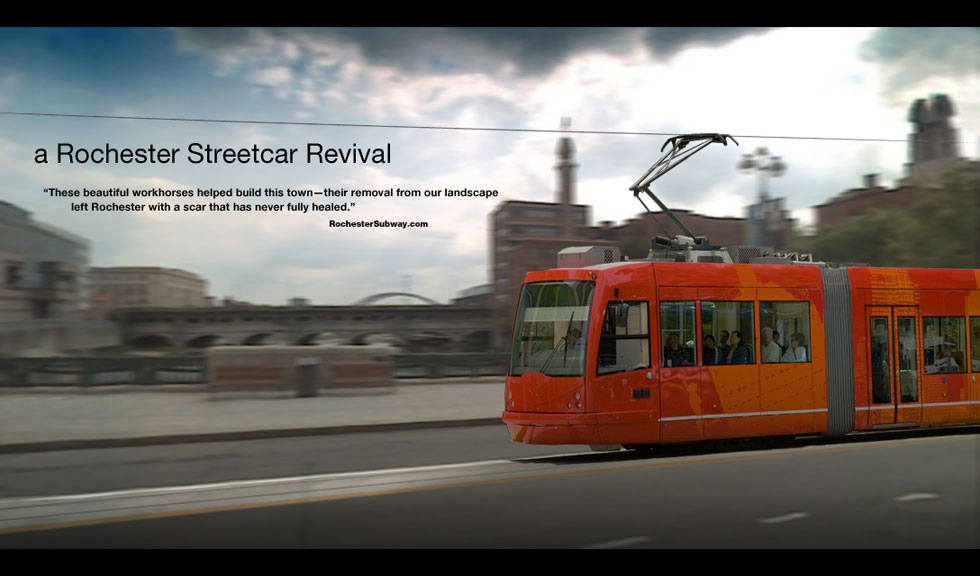 The following article was published at RochesterSubway.com on 2010/02/16. Two weeks later 6 citizens got together and Reconnect Rocheseter was born. America seems to have taken a renewed interest in mobility. Maybe due to President Obama’s recent commitment to high speed rail—or perhaps the positive results seen in towns like Portland and Denver have caught our collective attention. Whatever the reason, from the top down, people are rethinking our automobile-oriented culture—and getting excited about the possibilities.

There’s also good reason to focus on transportation as a way of jump-starting economic development. Industry requires access to people. And people need to have easy access to centers of employment. Continually improving access makes further development possible. Interrupting access will have the opposite effect. Likewise, doing nothing or simply maintaining existing infrastructure for an extended period of time will also hinder development.

For 30+ years Rochester has relied on the infrastructure choices it made in the 1950’s, 60’s, and 70’s. At that time we made development choices that encouraged our population to emigrate from the downtown core. We scrapped our extensive streetcar system, choked off downtown with the construction of the inner-loop, and paved super highways to take us from the city to the NY State Thruway and beyond. Since then that’s exactly where our money, our workforce, and our future have gone—down I-490 and out of state.