Before we get too far, we have to put a plug in for one of our upcoming events: a free Winter Cycling Class on Saturday, December 10! Join us at 11am in the CDCR’s Gallery (1115 E Main Street, Door 3B) to learn more about biking in the snowy season (hot cocoa provided).

Transportation parity in Rochester, New York can’t ignore winter. It’s not good enough or equitable to have a multitude of transportation options in the spring, summer and fall, and to have to resort to driving a car of your own in the winter. That’s why Reconnect Rochester has been championing better plowing of sidewalks and the clearing of bus stops so transit users don’t have to wait in the street for a bus.

1. Winter biking doesn’t have to be an extreme sport! In fact, it used to be pretty normal. NBD (no big deal).

Browse old bike periodicals and you’ll come to the same conclusion. Granted, once we entered the Eisenhower and Robert Moses era, winter biking became less common but that was due to the surge of automobiles dominating the roads, not the existence of winter itself.

2. There’s no difference between a 10-minute walk in the cold and a 10-minute bike ride in the same elements.

Lots of people take a regular walk outside in the winter. Perhaps they’re a dog owner taking their pet out on their “daily constitutional.” Or someone taking a walk in their neighborhood or further afield to enjoy nature. Those aren’t “extreme.” Neither is biking in the cold for a finite amount of time. In fact, biking in the cold tends to be more comfortable than walking because:

Because of the moderate “work” you’re doing turning those pedals, your body warms up. You can literally make three months of 30° feel like three months of 45°! That’s why cyclists and joggers wear less layers than they would otherwise when the temperatures drop. This outdoor exertion warming your body up makes winter more bearable for many. Necessary side notes:

4. As snowy as Rochester is, most winter days are cold temps and clear streets.

If someone chose to leave their bike at home on days when arterials have snow on them and biked only when those primary roads were clear, they’d be biking the majority of winter. Increasingly, I’ve found that we tend to get most of our snow during a handful of big events each year. The rest is pretty manageable. My experience is that altogether there are maybe 5-7 workdays a year when biking is completely inadvisable because the roads are flat-out unsafe. Not too bad for one of the world’s snowiest cities! Working from home in those instances is not an option for everybody, but it’s more common than it used to be. Of course there are times when an alternate mode, such as bus or taxi, might be the way to go.

5. Biking in the winter isn’t an all-or-nothing thing.

Extending one’s biking season happens by degrees. All cyclists start as fair weather cyclists, and that’s okay! When folks want to bike more, they first acclimate to riding at night or in the rain. Then they might extend their season to riding in the 50s. Then the 40s. The next step is 30s with clear streets. Then 20s with clear streets. Last of all is biking when there’s snow on the ground or when temps are super frigid. If you never get to those later phases, no worries! But it is possible due to studded tires, one of the best investments a Rochester cyclist can make.

6. The City of Rochester knows it needs to make progress in terms of clearing bike infrastructure in the winter.

It’s a challenge to do so, but the Rochester 2034 Comprehensive Plan acknowledges strides must be taken. After all, Buffalo’s Department of Public Works clears their bike lanes and shoulders.

For starters here, Reconnect Rochester has advocated for the Genesee Riverway Trail be cleared from downtown to the University of Rochester. Since the squeaky wheel gets the grease, let your councilmembers know that clearing of some bike infrastructure in the winter should be prioritized.

If you don’t want to bike in Winter, you don’t have to! But it’s probably easier and more feasible than you think. Those who choose to bike in Winter, taking advantage of Rochester’s average 4.1-mile commute, deserve better accommodations and to be passed safely and courteously as the law requires.

If you’re interested in learning more, come to our free Winter Cycling Class on Saturday, December 10 at 11am in the Community Design Center’s gallery space (1115 E Main Street, Door 3B). It’s chock full of practical tips to get you started.

If you want to learn more on your own, these two books are highly recommended: 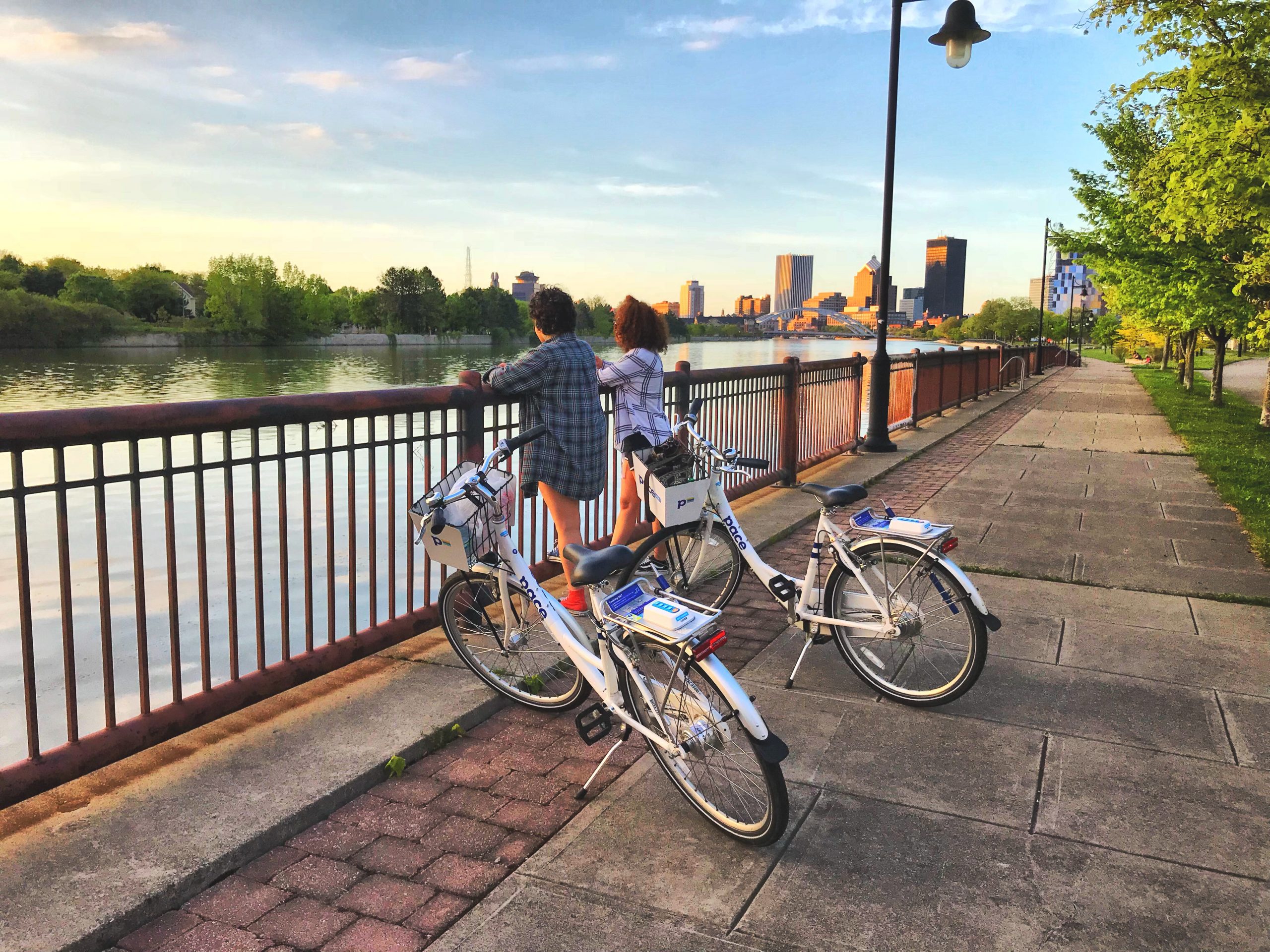 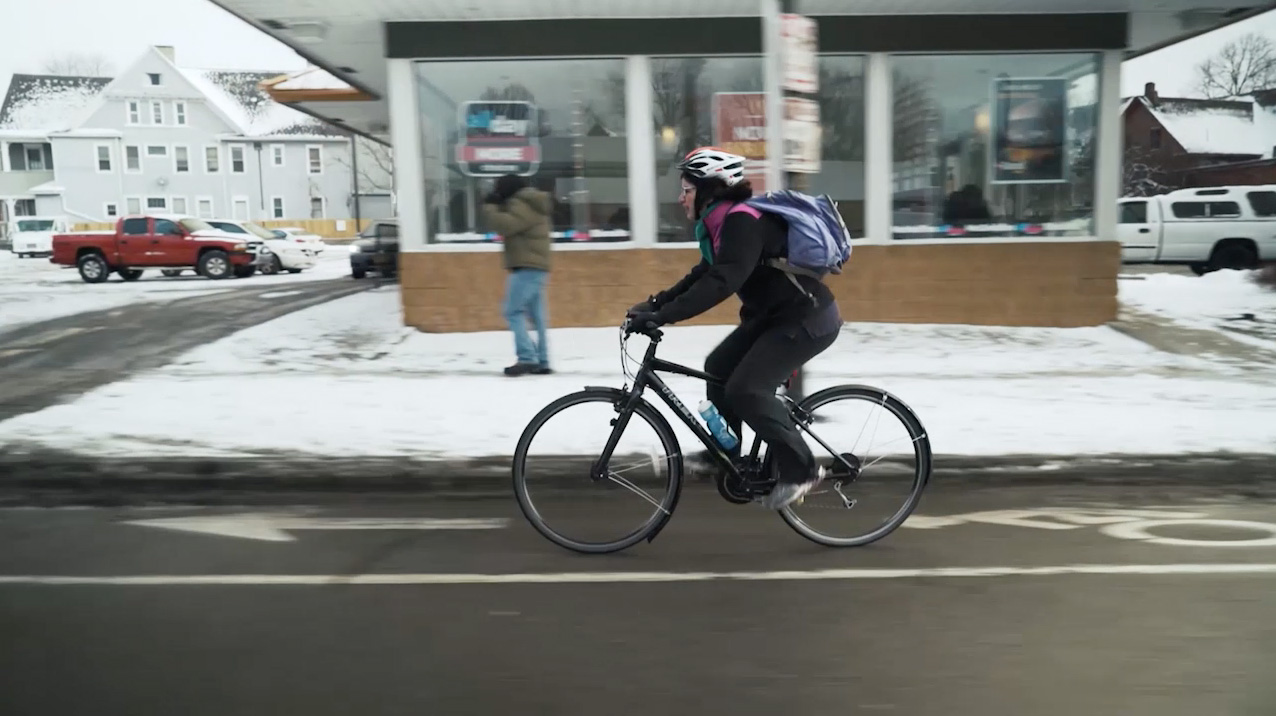