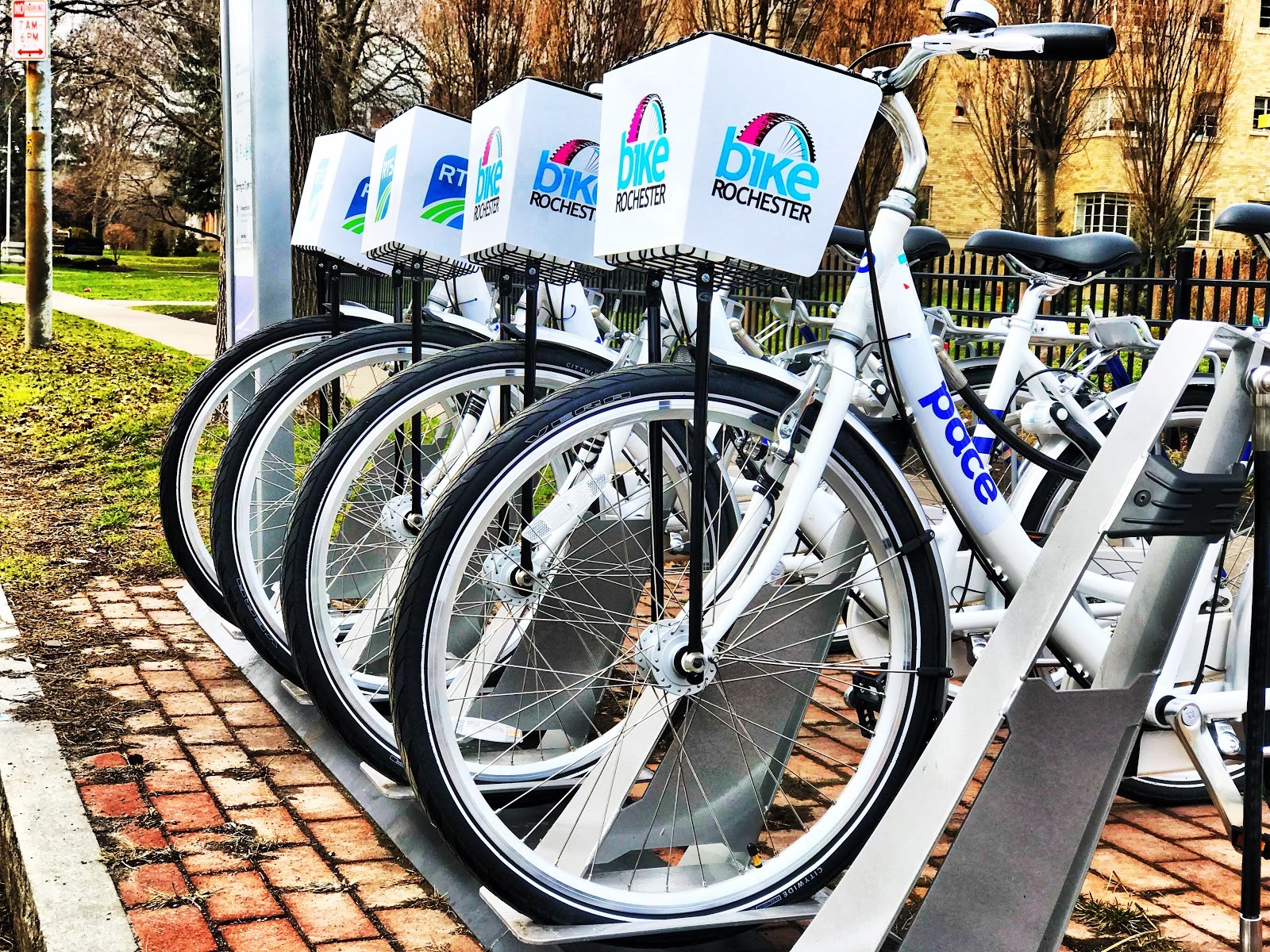 by Arian Horbovetz, Reconnect Rochester Board Member and author of The Urban Phoenix blog

If you’re like me, a firm believer that public transit, walkability and bike Infrastructure can make our city better, the last few months have been grueling.  Empty buses, the encouragement of single-passenger automobile ridership, and the loss of Zagster’s Pace bike share here in Rochester have us all wondering about the future of multi-dimensional mobility in our city.

Zagster’s abrupt departure from Rochester’s landscape earlier this year was a shock to many who believed that bike share made The Flower City a better place.  The freedom of grabbing a couple bikes while enjoying an evening downtown, or filling the last mile gap on your daily commute is suddenly absent.

The hope had been that 2020 would bring a fresh new season of bike share, and possibly scooter share to the Rochester transportation network, but the pandemic that is upon us had other plans.  Shortly after it was announced that the start of the Pace bike share season would be delayed, Zagster abruptly pulled the plug on the program altogether, stating that the company was “reassessing its business model.”  While Rochester actively searches for a new bike share vendor, here are some key points to understand about the Zagster/Pace departure.

It’s Not Our Fault

Zagster is a venture capital company, which is a business model that can quickly rocket a good idea to soaring heights.  The downside is an increased level of volatility, which can lead to these kinds of aforementioned “reassessments,” or even closures without warning.  The unprecedented impact of the COVID-19 crisis has caused a massive ripple in our nation’s economy, one that has caused every business to make drastic changes and hard decisions.  This was noted as a key reason for Zagster’s departure from Rochester, as well as ceasing operations in other mid-sized cities like Norfolk, VA. On May 27, Zagster formally announced its closure as a company.

Over the past three years, Pace bikes settled into our local culture as an easy, convenient way to get around. Over 22,000 Rochester residents activated accounts over the three years Zagster was operating in our city, and those customers took a remarkable 116,951 trips.

At Zagster’s end-of-season report in November 2019, it was reported that “Pace Rochester continues to be Zagster’s most utilized bike share fleet in the country, with 189 trips taken daily!”  Rochester riders totaled more than 40,000 trips in 2019 alone. Company representatives often described Rochester as Zagster’s “flagship” mid-sized city for our ridership numbers.

An end of year user survey in 2019 revealed that “half of all trips replaced the use of a personal or shared vehicle,” highlighting just how important the service was to the transportation landscape in the City of Rochester. And ridership mapping suggests that many Rochesterians heavily used the bike share to get to suburban job locations, like Marketplace Mall in Henrietta.

Midway through the 2019 season, empty bike racks and “ghost bikes” (bikes that appeared on the Pace App but were not physically present) revealed a rash of rampant bicycle theft.  Nearly two-thirds of Pace’s Rochester fleet was stolen, leading to a sea of bad press and public doubt.

While the stories of significant theft, followed by Zagster’s subsequent departure caused many Rochester residents to believe the two were related, it’s important to remember that bike share theft happens everywhere.  Wherever there is something of public value, there will always be a select few in any community who will try to pilfer it.  While the theft of Pace bikes in Rochester was difficult, it was not at all uncommon.  The onus is on the bike share provider to anticipate this construct and design their equipment with safeguards.  But the lack of a GPS tracking device on Pace bikes made solving the problem through recovery and prosecution of theft nearly impossible. The next vendor will need to have more anti-theft technology built into their bikes.

Fear not… Rochester will have bike share again.  And very likely, e-bikes and e-scooters will be added to the menu. The City Of Rochester is actively searching for a new operator with which to partner, and word on the street is that we may see a limited launch for a few months this fall, and a fully operational system in place by spring 2021.

This Is Not Another Fast Ferry

While we may fall victim to the Fast Ferry narrative of “this is why we can’t have nice things,” we must realize that the challenges that walk hand in hand with bike share are not unique to our city.  Zagster’s departure should not be seen as a failure to retain a valued resource, but rather a chance to connect with a new brand that is better equipped to handle the nuances of bike share in mid-sized cities.  So before we internalize the loss of Pace bike share as a Flower City Failure, let’s remember the big picture that was three years of successful bike share utilization in our city.

We know one thing for sure… Rochester’s stint with Zagster showed us all how vital a role bike share plays in the transportation fabric of the city.  While also serving as a tremendous recreational draw, bike share’s ability to connect residents and visitors to work, home, destinations and other modes of transit makes it a powerful piece of transportation infrastructure for Rochester.