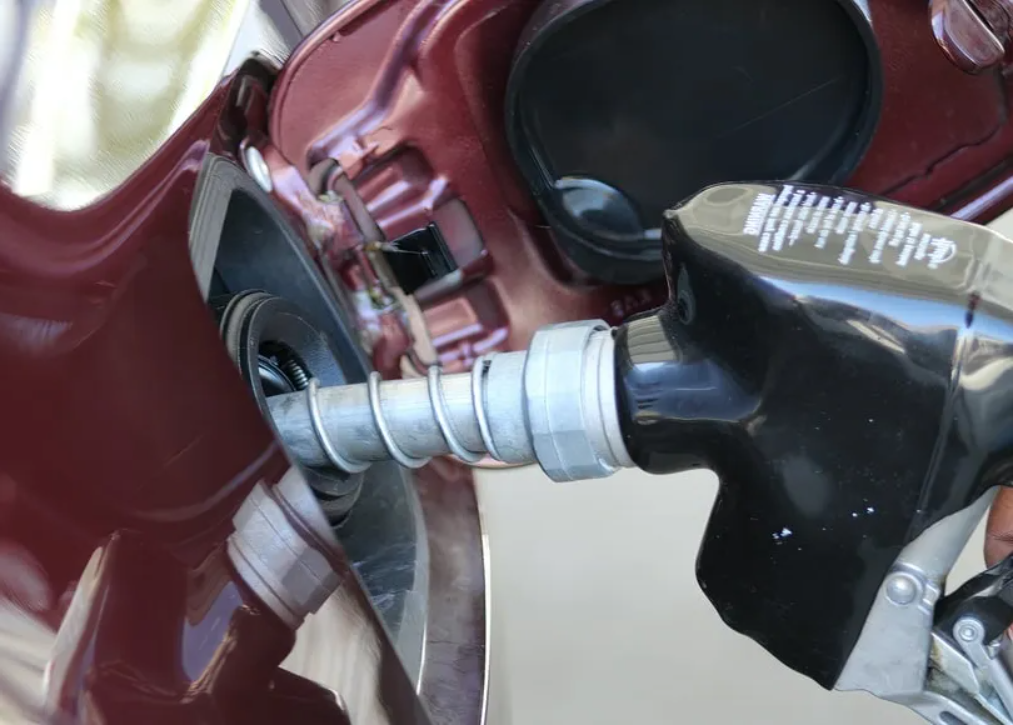 I didn’t start biking to work because gas was too expensive. I did it because I had this evolving sense of the world based around the central premise that the mode of transport I had spent my whole life worshiping was the very thing that was in conflict with everything I loved.

When I was 18, my friends and I made a stupid little club called “The Anti-Carpoolers Of America.” I made and printed badges on my computer, featuring a minivan with a slash through it, which we all taped to our dashboards. I purchased a brand new 2000 Honda Civic EX and after the Fast And The Furious series came out, I began modding out my ride with things like a cat-back exhaust, a cold-air intake, performance rims and tires and a bevy of visual additives that announced to the world that I was an immature kid who had no idea how to spend his money. I was born in Chicago and I loved public transit, but I hadn’t yet put together the whole “cars destroyed public transit” narrative that I know and tout today.

My buddy bought a Subaru Impreza WRX, maxing out his financial capacity just to have a car that made him the unquestioned alpha in our group of friends. A base model Impreza, a Dodge Neon with a cold air intake and a “grape fruit shooter” muffler, a lightly-modded out Nissan Maxima, my Honda Civic… they all became financed expressions of ego that propelled all of us forward as we tried to express ourselves in a “keeping up with the Jones’s” automotive mentality. I prided myself on the fact that I drove 100,000 miles in four years. To put that in perspective, I have driven approximately 100,000 miles in the last fifteen years. It’s March 8th of 2022, and I have driven a total of 600 miles this year. And that’s only because the snow has kept me from using other forms of transportation as much as I would like.

But now, there is more incentive than ever for me to flex my human and electric powered micro-mobility options. As someone who owns 4 bikes, 1 ebike, a Onewheel, an electric skateboard, 2 kick scooters, 2 electric scooters, and more skateboards than I would like to admit, I have been an advocate of micro-mobility for nearly a decade. When promoting alternative transportation to the general population (and not just urbanists), I have typically tried to appeal to the intangible “feeling” of independence, as well as the daily exercise. To this point, gas has remained cheap enough that it was impractical to include fuel cost savings in my advocacy argument.

Obviously, this has changed quickly and drastically. Russia’s invasion of Ukraine has caused gas prices to skyrocket toward record highs in the US and even higher in Europe. There has never been a time more ripe for a louder dialogue around human powered transportation, electric micro-mobility and public transit. While much of the country is blaming government for the regulation of fossil fuel drilling and delivery, people like myself continue to advocate for an alternative to our dependence on a single form of energy that is also tremendously damaging to our planet. True energy and mobility security does not come from greater access to a finite supply of oil, but rather a diversification of power sources, including human power.

In short, THIS is what all of us crazy cyclists, scooter riders, and electric micro-mobility junkies have been saying for a long time. At some point, a day like this was going to come, where the price of gas would literally make people hesitate before using their car for this or that. People have made choices — like buying a large vehicle or a house that’s 30 miles from their job — on the assumption that driving a car was always going to be affordable, despite the truth that at some point, fossil fuels would become scarce, prices would rise or circumstances would change. One of the central tenets of urbanism is simply that embracing density means we are not at the mercy of any of these variables.

As I’ve stated in the past, my wife and I live in an apartment that is just a few miles from each of our workplaces. I went years without a functional car, just recently splurging for a used compact car. Still, most days you’ll see me using a bike, a scooter or any number of other micro-mobility options for my commute and for running errands. Living a couple miles from Downtown Rochester also means we are closer to stores, shops and entertainment options. Literally, everything we need is within a few minute’s drive, a walk, a bike ride, etc.

This was a conscious decision and one we made because, among other reasons, we did not want to deal with the temporal or economic costs of living far away from our jobs and resources.

So gas prices went up. I am almost completely unaffected. Nor are my friends that share my desire for mobility independence. Even my wife, who drives every day, is impacted far less than most because of our close proximity to everything, including her job. Because really, we don’t necessarily need to be anti-car to limit the impact of variables like gas prices on our weekly budgets. Simply living a “denser” lifestyle ensures that we have everything we need with fewer miles in between.

I’m not a market economist, and I am certainly no international relations expert… who knows where this terrible conflict happening in Ukraine will end, and what will happen as a result. Back home, the fact that our worst fear lies in rising gas prices just shows how detached we are with what is happening elsewhere on our planet. And even more trivial is the notion that we continue to rely on a single form of energy for a huge percentage of our day-to-day mobility.

Living closer to cities, using public transit and micro-mobility means that market fluctuations have less of an impact on our wallets. It means that we can choose how to move about, rather than relying on the car alone. While the automobile has always been a symbol of American freedom, a simple market shift based on events elsewhere in the world means that freedom can quickly turn into a financial hurdle that many are struggling to afford. THIS is why we urbanists advocate for a life less dependent on cars, and thus, on fossil fuels. 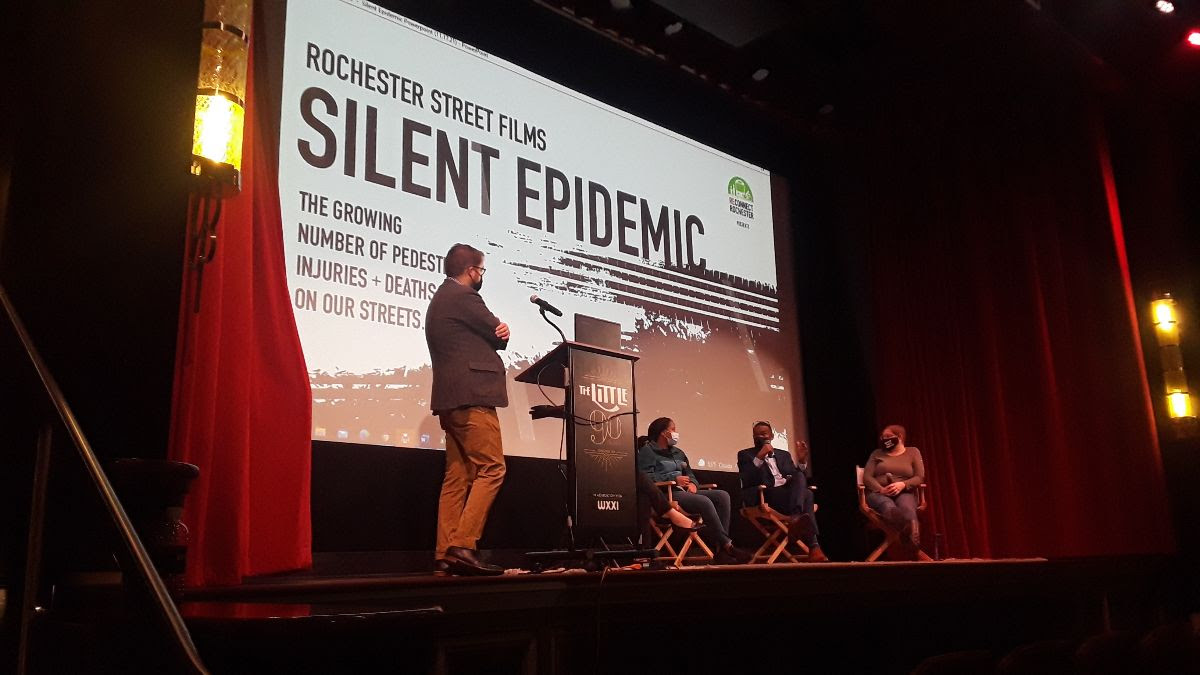 2021 is coming to a close. In the realm of transportation, this year brought a mix of positive progress and setbacks. At Reconnect Rochester, we strive to be innovative and to pivot fast when we see input opportunities to capitalize on, or mobility issues that need attention.

Despite the uncertainty and challenges of our times, we moved our mission forward with intensity. Below is “Top 10” list of accomplishments we’re most proud of this year.

TOP 10 THINGS WE’RE MOST PROUD OF IN 2021
(In no particular order of importance.)

In March, we made a virtual trip to Albany to champion public transit and safe streets for Rochester area residents (and all New Yorkers). In April & May, we made the rounds to meet with our federal legislators. Among other things, we asked for Phase 2 funding to build the station that long-distance bus riders deserve. Here’s our team meeting with staff from Senator Gillibrand’s office.

More Cubes on the Ground

Thanks to the City of Rochester and many other people and partners (you know who you are), we installed 16 more fiberglass bus stop cubes in the 19th Ward & La Marketa neighborhoods. That brings the total to 31 bus stops where RTS riders now have a respectable place to sit while they wait. Here’s a birds eye view from the balcony of Teen Empowerment on Genesee Street.

Weighing In on Projects & Plans

Through our Advocacy Committee, we submitted written input, attended public meetings and served on advisory committees on countless infrastructure projects and community plans. We urge planners and decision makers to create a connected community with streets and spaces designed for people. This kind of hyper-active advocacy work results in big wins, like the cycle track you see emerging here on E. Main Street, a project we weighed in on in 2019.

We continued to play an active role in what’s happening with public transit in our community. We partner with RTS to advocate for increased funding that will allow them to make service improvements and expand bus stop amenities. We support mechanisms that will give riders visibility and voice around decision making tables. When there was an unexpected rollback in service in September, we made a strong statement and tried to keep the community informed.

At our November edition of Rochester Street Films, we brought together our safe streets community partners, victims of road violence, community leaders and concerned citizens to have a community conversation about the silent epidemic of pedestrian injuries and fatalities on our streets. In case you missed it, watch the recording to catch up on the conversation!

Leading up to election days in June & November, we surveyed all candidates for Rochester Mayor and City Council to learn where they stand on issues related to transportation and mobility. Questions were designed to learn about their opinions, ideas and vision for a well-connected and accessible community.

We continued to exponentially expand cycling-focused programs, advocacy, education and outreach. In fact, there are so many accomplishments that we had to create a CYCLING TOP 10 LIST. These efforts are led by Cycling Manager Jesse Peers with support from countless passionate people and partners working to make our community a safer and more bike friendly place.

We helped educate the community and promote HOPR’s first season in our area, and we celebrated the installation of 8 new HOPR stations to expand bike & e-scooter access in Rochester’s underserved neighborhoods. We also spread the word about the launch of Floshare, an electric carshare pilot that offers an option for low income residents that can’t afford to own a personal vehicle.

We amped up content on our blog and enlisted guest blog writers to help us provoke thought and community engagement about things like transportation climate solutions, urban density, and designing streets for people. We’re especially proud of our 20 Minutes by Bike blog series.

Reconnect Rochester took some big leaps forward in 2021. We completed a 3-year strategic plan that charts our path ahead, announced a transformative investment by Dr. Scott MacRae (pictured above) that will enable us to expand our staff capacity, and appointed Mary Staropoli as Interim Executive Director to lead us through this period of growth and transition. In case you missed it, you can catch up on all the excitement here.